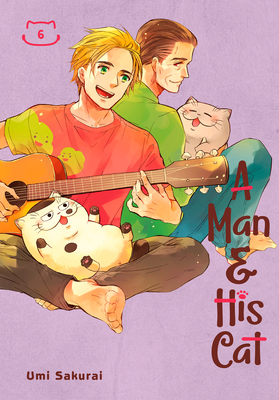 This is book number 6 in the A Man and His Cat series.

The top manga launch in Japan in the first half of 2018, A Man and His Cat was also voted one of the Top 10 manga of 2018 by Japanese bookstore employees nationwide.

Having won hearts and topped charts in Japan, this hotly anticipated series about an older gentleman and his unique, adorable cat is available in English for the first time!

Mr. Kanda knows loneliness all too well. But thanks to a little help from his friends—furry and otherwise—he's come back out of his shell and into the world, where he touches the lives of those around him too.

So when Mr. Kanda beholds his fellow music teacher and Fukumaru fanboy Mr. Moriyama standing frozen onstage after having been deserted by his bandmates mid-gig, Mr. Kanda must overcome his own trauma-induced stage fright to help his friend.

Will the courage and determination Mr. Kanda has regained with Fukumaru's help be enough to put on the ultimate performance and rescue Mr. Moriyama from a potentially disastrous turn of events?!

Manga creator Umi Sakurai burst onto the manga scene in Japan with her debut series The Vampire Called God. She began serializing A Man and His Cat on Twitter, where it garnered a massive following before being picked up for publication by Square Enix Japan.