The Tool & the Butterflies (Paperback) 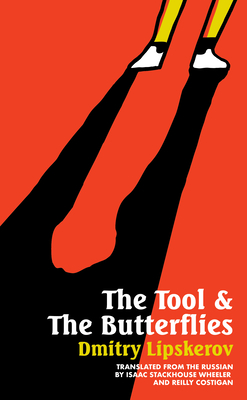 Dmitry Lipskerov, an award-winning Russian writer compared throughout his career to Mikhail Bulgakov and Gabriel Garcia Marquez, focuses his unbridled imagination on the story of wealthy, satisfied Mr. Iratov, whose virile world is flipped upside-down. Taking a page from Gogol's satirical story "The Nose," wherein the protagonist loses his aforementioned facial feature, Lipskerov's novel transposes such a loss onto a more delicate organ. The protagonist awakens one morning bereft of his tool; and the tool, which re-appears, sentient and in a small village far away, without his man. Thus begins a novel both funny and absurd, in which characters come together across disparate social strata and with differing goals to weave the fate of a universe familiar yet fantastical, a perfect satire of the madness of Russian society today. The Tool and the Butterflies, Lipskerov's eagerly anticipated English language debut, is not just a darkly comedic exploration of post-Soviet attitudes towards gender and sexuality, but also a historically and socially grounded narrative rich in naturalistic dialogue and everyday detail, and an engaging story of family and what matters most in life, in the grandest tradition of Russian literature.

Reilly Costigan-Humes and Isaac Stackhouse Wheeler are a team of literary translators who met as undergraduates at Haverford College, where they studied Russian language and literature. They are the co-translators of Voroshilovgrad by Serhiy Zhadan (Deep Vellum, 2016). Their translations from Russian and Ukrainian have been published in Coldnoon, The Missing Slate, Trafika Europe, and Two Lines. They are also the recipients of the translated book of the year prize from the American Association for Ukrainian Studies.