The Lost Pillars of Enoch: When Science and Religion Were One (Paperback) 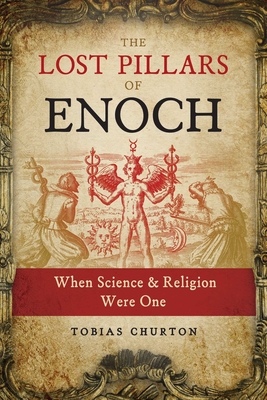 Esoteric tradition has long maintained that at the dawn of human civilization there existed a unified science-religion, a spiritual grasp of the universe and our place in it. The biblical Enoch--also known as Hermes Trismegistus, Thoth, or Idris--was seen as the guardian of this sacred knowledge, which was inscribed on pillars known as Enoch’s or Seth’s pillars.

Examining the idea of the lost pillars of pure knowledge, the sacred science behind Hermetic philosophy, Tobias Churton investigates the controversial Jewish and Egyptian origins of Josephus’s famous story that Seth’s descendants inscribed knowledge on two pillars to save it from global catastrophe. He traces the fragments of this sacred knowledge as it descended through the ages into initiated circles, influencing civilization through Hermetic, Gnostic, Kabbalistic, Masonic, Hindu, and Islamic mystical knowledge. He follows the path of the pillars’ fragments through Egyptian alchemy and the Gnostic Sethites, the Kabbalah, and medieval mystic Ramon Llull. He explores the arrival of the Hermetic manuscripts in Renaissance Florence, the philosophy of Copernicus, Pico della Mirandola, Giordano Bruno, and the origins of Freemasonry, including the “revival” of Enoch in Masonry’s Scottish Rite. He reveals the centrality of primal knowledge to Isaac Newton, William Stukeley, John Dee, and William Blake, resurfacing as the tradition of Martinism, Theosophy, and Thelema. Churton also unravels what Josephus meant when he asserted one Sethite pillar still stood in the “Seiriadic” land: land of Sirius worshippers.

Showing how the lost pillars stand as a twenty-first century symbol for reattaining our heritage, Churton ultimately reveals how the esoteric strands of all religions unite in a gnosis that could offer a basis for reuniting religion and science.

Tobias Churton is Britain’s leading scholar of Western Esotericism, a world authority on Gnosticism, Hermeticism, and Rosicrucianism. He is a filmmaker and the founding editor of the magazine Freemasonry Today. An Honorary Fellow of Exeter University, where he is faculty lecturer in Rosicrucianism and Freemasonry, he holds a master’s degree in Theology from Brasenose College, Oxford, and created the award-winning documentary series and accompanying book The Gnostics, as well as several other films on Christian doctrine, mysticism, and magical folklore. The author of many books, including Gnostic Philosophy, The Invisible History of the Rosicrucians, and Aleister Crowley: The Beast in Berlin, he lives in England.

“Highly informative, eye-opening, and uplifting, this book takes you on a provocative journey to discover the roots of human knowledge and fills you with hope that we may one day reattain our lost ancient heritage. Since my first encounter with Tobias Churton’s work twenty years ago, I am still amazed by his ability to expertly untangle the complex threads of history.”
— Joanna Gillian, chief editor of Ancient Origins, magazine

“Churton revisits the history of mankind and approaches its attempts to deal with the invisible since the dawn of times with a unique mastery. This book is not only of great erudition but could also be the start of a future global spiritual movement of the digital age.”
— Thomas Jamet, author, lecturer, and communication specialist

“Humanity’s near-manic obsession with lost and rediscovered wisdom is the basis for nearly all esoteric philosophy and practice. Taking the ancient myths and histories as his guide, Churton provides us not only with an interpretation of Enoch and the various ideas around the ‘known-and-lost-wisdom dichotomy’ as they have shaped our views across history, he also gives us a means of shaping and entering the future. It is a future quickly coming upon us, wherein the Pillars of Enoch once again are a depository of the collective wisdom of the past and the guide for a humanity seeking to understand itself and, like Enoch, ‘walk with God.’”
— Mark Stavish, author of Egregores

“This ambitious book traces the antediluvian origin of the spiritual wisdom hymned in the Book of Enoch. Churton explores the path of this unifying truth through the teachings of the mystery traditions that have served to initiate humanity ever since. Of central concern to this thesis is that the dichotomy between science and spirit is false. Truth is the unifying bond that excludes only error. The breach between science and religion is an artificial construct that serves to hinder understanding. I highly recommend this book.”
— James Wasserman, author of The Templars and the Assassins and The Mystery Traditions

“Churton leads us on a challenging and thought-provoking journey…Churton details traces of what he describes as fragments of this knowledge to be found in such initiated circles as Hermetic, Gnostic, Kabbalistic, Masonic, Hindu and Islamic backgrounds. Furthermore, Churton also strives to show how the esoteric strands of all religions can unite us in a gnosis that could ultimately provide us an opportunity to reunite religion and science as it is meant to be.”
— Brent Raynes, Alternate Perceptions Archival Newsletter

"Overall, I enjoyed The Lost Pillars of Enoch very much. The author presented a large amount of historical information in a balanced and insightful way, along with an occasional dose of humor that lightened the otherwise heavy subject matter. I would recommend this book to anyone interested in esoteric history and hermeticism. I’ve gained insight into how many of our current day ideas about spirituality, prophecy, and science have developed over time, and I’m encouraged that many of the myths we hold dear still have an important message for us."
— Cindie Chavez, Musing Mystical