The Myth of the Twentieth Century (Paperback) 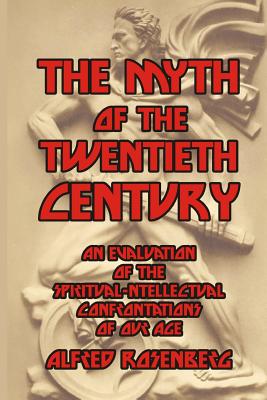 By Alfred Rosenberg
$17.55
Email or call for price.

Regarded as the second most important book to come out of Nazi Germany, Alfred Rosenberg's Der Mythus des zwanzigsten Jahrhunderts is a philosophical and political map which outlines the ideological background to the Nazi Party and maps out how that party viewed society, other races, social ordering, religion, art, aesthetics and the structure of the state.

The "Mythus" to which Rosenberg (who was also editor of the Nazi Party newspaper) refers was the concept of blood, which, according to the preface, "unchains the racial world-revolution."

Rosenberg's no-hold barred depiction of the history of Christianity earned it the accusation that it was anti-Christian, and that unjustified controversy overshadowed the most interesting sections of the book which deal with the world racial situation and the demand for racially homogenous states as the only method to preserve individual world cultures.

Rosenberg was hanged at Nuremberg on charges of "waging wars of aggression" even though he had never served in the military, and it is likely that he was hanged purely because of this book.