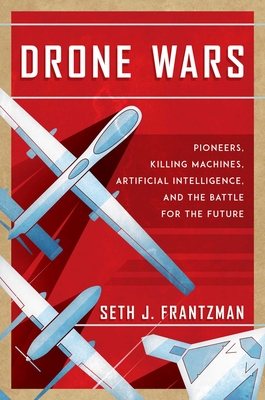 Drones are transforming warfare through the use of artificial intelligence, drone swarms, and surveillance—leading to competition between the US, China, Israel, and Iran. Who will be the next drone superpower?

In the battle for the streets of Mosul in Iraq, drones in the hands of ISIS terrorists made life hell for the Iraq army and civilians. Today, defense companies are racing to develop the lasers, microwave weapons, and technology necessary for confronting the next drone threat. Seth J. Frantzman takes the reader from the midnight exercises with Israel’s elite drone warriors, to the CIA headquarters where new drone technology was once adopted in the 1990s to hunt Osama bin Laden.

This rapidly expanding technology could be used to target nuclear power plants and pose a threat to civilian airports. In the Middle East, the US used a drone to kill Iranian arch-terrorist Qasem Soleimani, a key Iranian commander. Drones are transforming the battlefield from Syria to Libya and Yemen. For militaries and security agencies—the main users of expensive drones—the UAV market is expanding as well; there were more than 20,000 military drones in use by 2020. Once the province of only a few militaries, drones now being built in Turkey, China, Russia, and smaller countries like Taiwan may be joining the military drone market. It’s big business, too—$100 billion will be spent over the next decade on drones. Militaries may soon be spending more on drones than tanks, much as navies transitioned away from giant vulnerable battleships to more agile ships. The future wars will be fought with drones and won by whoever has the most sophisticated technology.

Seth J. Frantzman, PhD, was born in Maine, is a correspondent at The Jerusalem Post, and is the author of After ISIS: America, Iran and the Struggle for the Middle East. As the director of MECRA, he reported on conflict in Iraq, Turkey, Jordan, Egypt, and Israel.

"A riveting account of one of the most significant developments in contemporary warfare—the evolution and proliferation of drones. Seth Frantzman provides a compelling description of this development and of the challenges facing the US and other countries as they grapple with the rapidly emerging threats posed by the new technology. He also conveys a sobering analysis about how this technology is transforming warfare and a convincing case for better defenses against drones in the hands of terrorists, non-state actors, and near-peer adversaries. This is a very important book."
— General David Petraeus, US Army (Ret.), former Commander of the Surge in Iraq, US Central Command, and Coalition and US Forces in Afghanistan, and former Director of the CIA

"A fast-paced account of the pioneers behind today's military drones, in Drone Wars, author Seth J. Frantzman sheds a light on the shadowy world of military drones and how these new technologies are changing the modern battlefield. The global proliferation of drones and their incorporation by militaries and terror groups creates an urgency for developing and fielding defenses against drones and keeping up with countries and groups that may pose an increasing threat."
— Richard Kemp, former Commander of British forces in Afghanistan and led the international terrorism team at Britain's Joint Intelligence Committee