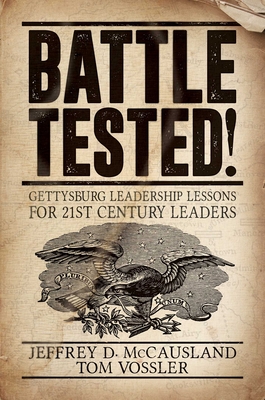 You may never visit the Gettysburg battlefield, but understanding historic lessons from Battle Tested! will have a profound influence on not only your leadership abilities, but also your life, organizations, and career.

In order to be a truly effective leader, it is necessary to learn as much as possible from the examples of history—the disasters as well as the triumphs. At Gettysburg, Union and Confederate commanders faced a series of critical leadership challenges under the enormous stress of combat. The fate of the nation hung in the balance. These leaders each responded in different ways, but the concepts and principles they applied during those traumatic three days contain critical lessons for today’s leaders that are both useful and applicable—whether those leaders manage operations at a large corporation, supervise a public institution, lead an athletic team, or govern a state or municipality.

In the twenty-first century, leadership is the indispensable quality that separates successful organizations from failures. Successful leaders communicate vision, motivate team members, and inspire trust. One must move both people and the collective organization into the future while, at the same time, dealing with the past. A leader must learn to master the dynamic requirements of decision-making and change.

Jeff McCausland is the founder and CEO of Diamond6 Leadership and Strategy, LLC. He also serves as a Visiting Professor of International Security Affairs at Dickinson College and is a former Distinguished Visiting Professor of Research and Minerva Chairholder at the U.S. Army War College. Jeff is a retired U.S. Army Colonel, holds a PhD from the Fletcher School of Law and Diplomacy, and is a West Point graduate. His military assignments included: the Office of the Deputy Chief of Staff for Plans, Army Staff; command of an artillery battalion during the Gulf War; Dean of the Army War College; and Director for Defense Policy and Arms Control, National Security Council Staff, the White House. Since retiring he has served as a Chaired Professor of Leadership at the U.S. Naval Academy and subsequently a Visiting Professor at the Penn State Graduate School of International Affairs. Jeff is also a national security consultant for CBS radio and television as well as a Senior Fellow at both the Carnegie Council for Ethics in International Affairs in New York, and the Stockdale Center for Ethical Leadership at the Naval Academy. He has published and lectured broadly—both in the United States and over twenty-five foreign countries—on national security affairs, NATO, the wars in Afghanistan/Iraq, and leadership development.

Co-author Colonel Tom Vossler, U.S. Army (Retired) served thirty years active military service in the U.S. Army to include command of an infantry platoon in combat during the Vietnam War. Since retiring in 1998, Tom has worked as a Federally examined and Licensed Battlefield Guide at Gettysburg where he specializes in battlefield studies and leadership seminars for national and international military units and civilian corporations. Additionally, Tom conducts on an annual basis upwards of fifty Gettysburg battlefield tours for individuals, families and youth groups.

For the past ten years, Tom has served as the leading historian for Jeff McCausland’s Diamond6 Leadership and Strategy, LLC. on American Civil War battlefields at Gettysburg, Antietam, and Manassas. The book which they’ve collectively put forward is the culmination of ten years of leadership seminars conducted "on the field" with various and disparate groups of high achievers.

Tom is the co-author of two previous books on the 1863 battle at Gettysburg (one in the second edition) and one book on the 1862 battle of Antietam at Sharpsburg, Maryland. His television credits include participation in historical documentary programs appearing on The History Channel, The Discovery Channel, C-SPAN 3, and the Pennsylvania Cable Network.

“Battle Tested! uses one of the greatest crises in the history of the nation—the Battle of Gettysburg—to illustrate leadership concepts and principles that are enduring. The lessons from this book are as applicable to modern leaders as they were in 1863. Every leader will find it not only an engrossing read but an invaluable contribution to their professional library.”
— Admiral Jim Stavridis, US Navy, Supreme Allied Commander at NATO (2009–2013) and Dean, The Fletcher School of Law and Diplomacy at Tufts University (2013–2018)

“Battle Tested! provides an exceptional leadership education in a contextualized format, the Battle of Gettysburg, making the lessons learned both powerful and relevant for every reader. This is the exact style of leadership book that needs to be shared with teams, colleagues, even family members. Not only does it offer a refreshed definition of leadership, but one that can be applied in both everyday business environments and leading in crisis scenarios.”
— Angie Morgan, Captain, USMC and Author of Leading from the Front and the New York Times Bestselling Spark: How to Lead Yourself and Others to Greater Success

“Many books have been written on leadership, even more on military history, and a few have combined the two. But rare are those that have so successfully mined the historical record to extract valuable leadership lessons as Battle Tested!. Jeff McCausland has combined his experience as a scholar, his own battle-tested career as a military officer and his years of studying America’s most consequential battle to provide us with contemporary business lessons. Not only a riveting civil war history of the Battle of Gettysburg, but also a present-day primer on how to lead in uncertain times, Battle Tested! rewards careful reading and demands a very wide audience.”
— Ambassador Mitchell Reiss, former President and CEO of the Colonial Williamsburg Foundation

“Jeff McCausland and Tom Vossler masterfully combine the historical analysis of the Battle of Gettysburg with the leadership lessons learned for modern day leaders. Battle Tested! captures hundreds of leadership moments and messages from the Battle of Gettysburg and describes them in such a way that they become relevant and as powerful today as they were during that time in our history. Once you read this book you will understand that leadership is everyone’s job, but it begins with you.”
— Kent Bechler, Executive Leadership Coach

“A timely, practical, historical and most importantly, wonderful opportunity for real thinking, discussing and learning. Jeff and Tom use their years of both hands-on leadership and academic rigor to gift us with this leadership learning journey. Their unique writing style of using the past (the Battle of Gettysburg) and the present (Enron, Walmart, and so on), skillfully and effectively walks the reader through a leadership journey that is second to none. Their keen insights and questions provide the reader with real leadership learning points and skills that can (and should) be used in any organizational setting. A must read for those interested in either Gettysburg, leadership development, or better yet…both! Well done!”
— Joe Doty, Executive Director, Feagin Leadership Program, Duke University

"A timely, practical, historical and most importantly, wonderful opportunity for real thinking, discussing and learning. Jeff and Tom use their years of both hands-on leadership and academic rigor to gift us with this leadership learning journey. Their unique writing style of using the past (the Battle of Gettysburg) and the present (Enron, Walmart, and so on), skillfully and effectively walks the reader through a leadership journey that is second to none. Their keen insights and questions provide the reader with real leadership learning points and skills that can (and should) be used in any organizational setting. A must read for those interested in either Gettysburg, leadership development, or better yet... both! Well done!”
— Joe Doty, Executive Director, Feagin Leadership Program, Duke University

“Using the crucible of crisis that was Gettysburg as their classroom, the authors have woven a compelling and impactful analysis of leadership. Examining the challenges and decisions made by leaders who fought the battle, he translates their actions over one hundred and fifty years ago into lessons that are relevant to business and corporate leaders today. Their analysis of how leaders lead, how subordinates follow and how both interact is sharply defined in his keen analysis of the battle and the step by step decisions each made throughout the three-day struggle. Uniquely valuable is his tie-in to modern leadership examples from sports teams to Fortune 50 companies. For the history buff or the corporate leader, Battle Tested! is a worthy addition to your must-read list.”
— Jack Tomarchio, former Principal Deputy Under Secretary of Homeland Security for Intelligence

“I have walked the Gettysburg Battlefield in the company of the authors as they guided business and military students, educators, and company executives through the history and strategy of the battle. The lessons drawn by McCausland and Vossler during these visits have inspired each of us to reflect deeply not only on the character, actions, and decisions of the officers who led their troops into battle, but also on what future generations of leaders in business, nonprofit organizations, and government can learn and apply. What you will learn from reading this book will illuminate your own path forward.”
— Dr. Chris Maxwell, Senior Fellow, Center for Leadership and Change Management, The Wharton School of the University of Pennsylvania, Author of Lead Like a Guide

“Following this dramatic and imaginative reexamination of the three days of intense conflict between the Union and Confederate armies at Gettysburg in July of 1863, McCausland and Vossler proceed skillfully to elicit contemporary leadership lessons from several of the individual encounters and campaigns of those rival armies. The authors invite us to focus on visionary strategic success and tragic failure, as well as on grave tactical errors and extraordinary innovative achievements. Based on the US Army’s learning concept of battlefield ‘Staff Rides,’ these lessons in human courage, innovation, and failure under fire take full advantage of the imaginative hold this historic battle has upon the American consciousness in order to teach essential aspects of successful leadership applicable then, now, and for future generations. Readers will not be able to put down this remarkable, insightful, and instructive book!”
— George Lucas, PhD, Distinguished Professor of Ethics emeritus, US Naval Academy

“Battle Tested! is an exciting story. And as with all good stories, there are lessons to be learned. Battle Tested! shows leadership in the crucible of real-time, life and death decision-making. It sets context, puts you in the shoes of leaders and followers at every level, and gives the reader a perspective that comes only with experience. Perhaps most important, this book connects ethics to leadership. Good leadership depends on the virtues of competence, trust, accountability, empathy, and humility. These virtues are on full display as McCausland tells the story of Gettysburg with all of its complexity, tragedy, and human struggle. The world today is in dire need of leaders locally, regionally, nationally, and internationally. Thanks to leaders like McCausland and Vossler and books like this, we can summon the principles of those who have been tested and from whom we can model our own behavior. In this way we are all leaders, even when we are only leading ourselves.”
— Joel Rosenthal, President, Carnegie Council for Ethics in International Affairs