Change Everything: Racial Capitalism and the Case for Abolition (Paperback) 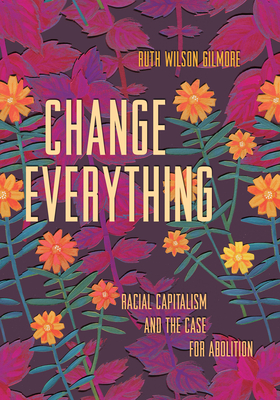 Racial, gender, and environmental justice. Class war. Militarism. Interpersonal violence. Old age security. This is not the vocabulary many use to critique the prison-industrial complex.

But in this series of powerful lectures, Ruth Wilson Gilmore shows that the only way to dismantle systems and logics of control and punishment is to change questions, categories, and campaigns from the ground up.

Abolitionism doesn 't just say no to police, prisons, border control, and the current punishment system. It requires persistent organizing for what we need, organizing that 's already present in the efforts people cobble together to achieve access to schools, health care and housing, art and meaningful work, and freedom from violence and want.

As Gilmore makes plain, Abolition requires that we change one thing: everything.

Change Everything is the inaugural book in the new Abolitionist Papers book series, edited by Naomi Murakawa.

Ruth Wilson Gilmore is Professor of Earth & Environmental Sciences and Director of the Center for Place, Culture, and Politics at the City University of New York Graduate Center. Co-founder of many grassroots organizations including the California Prison Moratorium Project, Critical Resistance, and the Central California Environmental Justice Network, Gilmore is author of the prize-winning Golden Gulag: Prisons, Surplus, Crisis, and Opposition in Globalizing California (UC Press). Recent publications include "Beyond Bratton" (Policing the Planet, Camp and Heatherton, eds., Verso); "Abolition Geography and the Problem of Innocence" (Futures of Black Radicalism, Lubin and Johnson, eds., Verso); a foreword to Bobby M. Wilson's Birmingham classic America's Johannesburg (U Georgia Press); a foreword to Cedric J. Robinson on Racial Capitalism, Black Internationalism, and Cultures of Resistance (HLT Quan, ed., Pluto); and, co-edited with Paul Gilroy, Stuart Hall: Selected Writings on Race and Difference (Duke). Forthcoming projects include Change Everything: Racial Capitalism and the Case for Abolition (Haymarket); Abolition Geography: Essays Toward Liberation (Verso). Gilmore has lectured in Africa, Asia, Europe, and North America. In April 2019 novelist Rachel Kushner profiled Gilmore in The New York Times Magazine. Recent honors include the SUNY-Purchase College Eugene V. Grant Distinguished Scholar Prize for Social and Environmental Justice (2015-16); the American Studies Association Richard A Yarborough Mentorship Award (2017); The Association of American Geographers Lifetime Achievement Award (2020); and election to the American Academy of Arts and Sciences (2021).Naomi Murakawa is an associate professor of African American Studies at Princeton University. She studies the reproduction of racial inequality in 20th and 21st century American politics, with specialization in crime policy and the carceral state. She is the author of The First Civil Right: How Liberals Built Prison America. She is the editor of the Abolitionist Papers book series at Haymarket Books.