Marvin's Monster Diary 3: Trouble with Friends (But I Get By, Big Time!) An ST4 Mindfulness Book for Kids (Paperback) 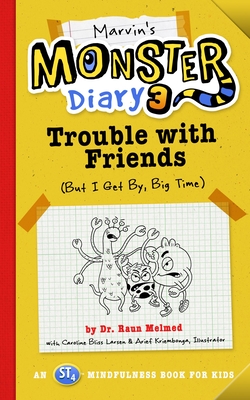 This is book number 5 in the Monster Diary series.

School’s out and summer camp’s in! When Marvin and his friends meet Joey, a lake monster with a loud mouth and few manners, it seems that Marvin is the only kid in camp who will be his friend. And Marvin’s friendship with the lake monster is causing ripples among his other friends. No one wants to be around the kid who cuts in line, or talks over them, or tells them what he really thinks about their art project. But Joey secretly wants only one thing: friends. Can Marvin help Joey learn how to make—and keep—friends? Marvin's hilarious doodles and diary entries chronicle his delightful adventures, misadventures, and eventual triumph in a funny, relatable way. It's the one series on ADHD and associated issues that kids will actually want to read!

Caroline Bliss Larsen is a children’s book author and full-time editor. To clear her head of words from time to time, she likes to Irish dance, play games, and snuggle her nieces, nephew, husband, and delightfully clingy cat.

Arief Kriembonga is a children’s and comic book illustrator,  a UI/UX and graphic designer, and a single-origin coffee connoisseur who lives with his wife and one beloved daughter in Jakarta, Indonesia.