Our Biggest Experiment: An Epic History of the Climate Crisis (Hardcover) 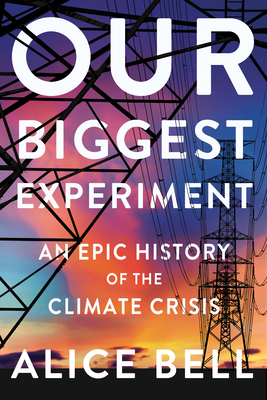 Traversing science, politics, and technology, Our Biggest Experiment shines a spotlight on the little-known scientists who sounded the alarm to reveal the history behind the defining story of our age: the climate crisis.

Our understanding of the Earth's fluctuating environment is an extraordinary story of human perception and scientific endeavor. It also began much earlier than we might think. In Our Biggest Experiment, Alice Bell takes us back to climate change science's earliest steps in the eighteenth and nineteenth centuries, through the point when concern started to rise in the 1950s and right up to today, where the “debate” is over and the world is finally starting to face up to the reality that things are going to get a lot hotter, a lot drier (in some places), and a lot wetter (in others), with catastrophic consequences for most of Earth's biomes.

Our Biggest Experiment recounts how the world became addicted to fossil fuels, how we discovered that electricity could be a savior, and how renewable energy is far from a twentieth-century discovery. Bell cuts through complicated jargon and jumbles of numbers to show how we're getting to grips with what is now the defining issue of our time. The message she relays is ultimately hopeful; harnessing the ingenuity and intelligence that has driven the history of climate change research can result in a more sustainable and bearable future for humanity.

ALICE BELL is a climate campaigner and writer based in London. She co-runs the climate change charity Possible, working on a range of projects from community tree planting to solar-powered trains. She has a PhD in science communication from Imperial College London and a BSc in the history of science from University College London, and has worked as both an academic and journalist, writing about everything from the radical science movement of the 1970s to plastic recycling in labs.

"Our Biggest Experiment charts the history of the climate crisis, highlighting the people who began connecting the dots—and those who stymied their efforts . . . Bell dashes through centuries of science with vivid, fluid writing, enlisting a sprawling cast of characters to shed light on topics including the creation of the world’s modern energy mix and the birth of atmospheric understanding . . . Bell paints a dark picture of the world but not one without hope." —Christina Lu, Foreign Policy

"[Our Biggest Experiment] deftly weaves subtle and lesser-known details about the brilliant (and sometimes eccentric) individuals who have worked out how to measure and describe what we, as a species, have wrought upon Earth. Bell’s focus is on the complex human story of discovery and realization, ensuring that readers appreciate both the impressive intellectual achievements that have punctuated this story and the thorny threads of racism, sexism, and colonialism that are intertwined with them." —Gifford J. Wong, Science

"Our Biggest Experiment is a highly enjoyable rabbit hole of a book: [Bell] chronicles the science and history of climate change in an intuitive manner that glides easily from one episode to the next. It’s a sweeping narrative of industry, energy and atmospheric science, and much of Bell’s achievement lies in artfully assembling pieces of the climate puzzle scattered across time and space." —Anjana Ahuja, New Statesman

"From histories of energy systems to the development of big science, this comprehensive book is an epic feat of storytelling." ––BuzzFeed

"Through such a wide-ranging history of energy, technology, and science, the world we’ve built appears fragile and our problems interconnected, the crisis fully underway . . . We still have choices, Bell asserts, even if they’re more limited than they used to be. But she insists that any meaningful change to mitigate the impact of global warming will require radical, long-range action." —Andru Okun, Undark

"With insight, rigor, and humor, Bell illuminates how the very fuel sources that made our modern world are likely to be its undoing." —Audubon Magazine

"A sweeping account of hundreds of years of developments in energy, science, technology, and environmentalism that attempts to make sense of how the world got into our current mess. It’s a tremendous task, and Bell resists the temptation to simplify the story, offering a nuanced look at the past instead of a tale of good and evil." —Kate Yoder, Grist

"A compelling and very readable review of the centuries-long history of events that led to the current climate crisis." —Michael Svoboda, Yale Climate Connections

"Broad-ranging history of the catastrophic crisis that is well underway . . . Of interest to anyone concerned with climate change and our long, lamentable history of ignoring it." —Kirkus Reviews

"[A] thorough and sweeping history of the climate crisis . . . Bell makes a convincing case that in order to effectively deal with climate change, people must understand how the world got to this point . . . Impressive in scope, this deserves wide readership." —Publishers Weekly

"The expansive research involved is laudable . . . Bell's overview of how industrialization led to the climate crisis is a good match for those seeking a brisk approach to the subject." —Booklist

"Our Biggest Experiment is a spectacular achievement—the definitive history of the most consequential issue of our time. Majestic in scope, it offers not one but two epic stories—how we changed the world, and how we came to realize what we've done—told through Alice Bell's charming, witty, and authoritative writing." —Ed Yong, author of I Contain Multitudes

"Our Biggest Experiment is chock full of fascinating details about how we got to where we are with the climate emergency, and how racism and colonialism have been tangled up in our learning all along the way. Bell smartly speaks of the climate crisis as a social project. Yes, this is a history of reprehensible profiteering and science denial, but it is also a history of the stunning human capacity to learn, of brilliant minds, and irrepressible hopes for a better world." —Alison Hawthorne Deming, author of A Woven World