Witchblood : The Hounds of Love (Paperback) 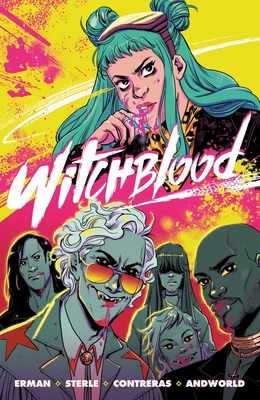 MAGIC IS IN THE BLOOD

A modern, Wild West road trip about a witch named Yonna cruising the Southwest as a band of bloodthirsty biker vampires, The Hounds of Love, hunt her scattered coven for the source of all magic: witch blood. From the critically acclaimed creators of The Modern Witch Tarot Deck and Long Lost comes Witchblood, a blend of action, lore, and Americana—perfect for fans of Buffy and American Gods.

Matthew Erman is a comics writer from Columbus, Ohio. Alongside Lisa Sterle, he co-created the critically acclaimed comic horror series, Long Lost, which was optioned for Film/TV by Producer Jenny Klein (The Witcher, Daisy Jones and The Six). Erman has since worked on the comic book series Jim Henson’s The Dark Crystal: Age of Resistance and graphic novel Power Rangers: Sins of the Future with BOOM! Studios, series Care Bears: Unlock the Magic with IDW, the upcoming  science fiction/ horror / humorous romance original graphic novel BONDING, with artist and co-creator Emily Pearson for Vault Comics, and the smash supernatural action adventure comics series (with artist/co-creator Lisa Sterle) from Vault Comics, WITCHBLOOD. His short work can be found in anthologies such as Corpus (2018), Dead Beats (2019) and Everything is Going Wrong (2019).

Lisa Sterle is a Columbus artist with work spanning from comic books to concept design to pop-culture-fueled illustration. Her work is often bright, expressive, and occasionally tinged with horror— marrying her two favorite themes: the beautiful and the grotesque. She has worked with HarperCollins, IDW, Image, Archie Comics, Vault Comics, BOOM! Studios, and many others. She is the co-creator of monthly comics Long Lost and Submerged (Vault Comics), and Witchblood (Vault comics), as well as creator of The Modern Witch Tarot Deck, a modern and diverse interpretation of the classic Rider-Waite tarot deck. Currently she is working on the graphic novel Squad with writer Maggie Tokuda-Hall for Greenwillow Books.

"Loud and brash and high-energy, the kind of thing that makes readers yearn to see what will come next...[packed with] gripping, stylish thrills."
— Women Write About Comics

"A mixtape in comic form, that blends familiar lore, with the roughness of the Wild West...the creative team has successfully given us a character who although vulnerable, packs some serious attitude, you can’t help but root for her, and with the dangers she has stumbled upon and the revelation of her WITCHBLOOD, we are on our way to be treated to some action-packed, magic in the making."
— Geek Network

"Witchblood #1 is a fun, splashy start to a stylish series."
— AV Club

"Want a chaotic,fun time? Witchblood is just the levels of chaos you need in your life."
— Wandering Nerd Girl

"Witchblood is the most beautiful form of a passion project...This comic really is something special, not just for fans of witchcraft and vampires, but for anyone who loves colour, representation, and the craft done right."
— The Valkyries