Shanda: A Memoir of Shame and Secrecy (Hardcover) 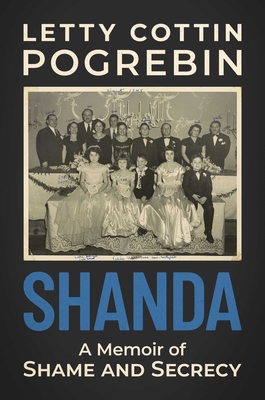 An intimate memoir from a founding editor of Ms. magazine who grew up in a Jewish immigrant family mired in secrets, haunted by their dread of shame and stigma, determined to hide their every imperfection—and in denial or despair when they couldn’t.

“A frank and often amusing tabulation of well-kept family secrets... a story of high-stakes melodrama and surreptitious relations, in which runaway brides, false marriages, lost children and other moral crises abound. But there is more here than mishegas.” —Jake Nevins, New York Times

“The richness of Pogrebin’s stories, the complexity and beauty of her storytelling, and her devastatingly honest soul-baring make Shanda a powerfully stunning piece of life and art.”
—Mayim Bialik, actor, author, neuroscientist, and co-host of Jeopardy

The word “shanda” is defined as shame or disgrace in Yiddish. This book, Shanda, tells the story of three generations of complicated, intense 20th-century Jews for whom the desire to fit in and the fear of public humiliation either drove their aspirations or crushed their spirit.

In her deeply engaging, astonishingly candid memoir, author and activist Letty Cottin Pogrebin exposes the fiercely-guarded lies and intricate cover-ups woven by dozens of members of her extended family. Beginning with her own long-suppressed secret, the story spirals through the hidden lives of her parents and relatives—revealing the truth about their origins, personal traumas, marital misery, abandoned children, religious transgressions, sexual identity, radical politics, and supposedly embarrassing illnesses. While unmasking their charades and disguises, Pogrebin also showcases her family’s remarkable talent for reinvention in a narrative that is, by turns, touching, searing, and surprisingly universal.

Letty Cottin Pogrebin, co-founder of Ms. magazine, is a nationally acclaimed writer, activist, and public speaker. The author of twelve books, she has also published articles and essays in numerous print and online periodicals, including the New York Times, The Nation, and Huffington Post. She is a co-founder of the National Women’s Political Caucus and the Ms. Foundation for Women; a past president of the Authors Guild and Americans for Peace Now; and has served on the boards of the Harvard Divinity School Women in Religion Program and the Brandeis University Women’s and Gender Studies Program. Among her many honors is a Yale University Poynter Fellowship in Journalism, a Matrix Award for excellence in communication and the arts, and an Emmy Award for her work as consulting editor on the TV version of Marlo Thomas’s Free to Be...You and Me. Pogrebin lives with her husband in New York City and Stockbridge, Massachusetts.

"From its opening lines, Shanda captures our universal feelings about secrets and shame, and never lets us go. In this emotionally deep, often profoundly funny memoir, Letty Cottin Pogrebin confronts the darkness, shrinks it, and brings us out into the light. Her literary voice is one-in-a-million."
— Tovah Feldshuh, Tony and Emmy-nominated actress, writer, and playwright

"With unflinching honesty, Pogrebin takes on the defining role of shame in her family, helps us name our own vulnerabilities, and reframes humiliation and secrecy into a powerful reckoning with our hidden truths and by extension, our humanity. Shanda is amazing, relatable, her bravest book yet."
— Angela Buchdahl, Senior Rabbi, Central Synagogue (NYC), first Asian-American to be ordained a rabbi

"This is a memoir wonderfully grounded in the vibrancy of Jewish-American life, circa mid-20th-century. Its warmth and affection are contagious."
— Vivian Gornick, literary critic, essayist, and memoirist

"Secrets are costly—heavy weights to carry around. In Shanda, Letty Cottin Pogrebin takes aim at shame, the factory where the costliest secrets are made. She dismantles the machinery of shame, and she does it with stories that are vivid, emotional, and unforgettable."
— Alan Alda, actor, author, and director

"You don't have to be Jewish to love Shanda. (I grew up a Congregationalist Christian). You will marvel at Pogrebin's always compassionate, often funny descriptions of the astounding family secrets kept by those nearest and dearest to her. (My language would not have been quite so wonderful!)."
— Former Congresswoman Patricia Schroeder (Colorado)

"Pogrebin has written much about family, politics, revolution, and evolution. Now she brings her fulsome attention to private and public shame, the personal secrets that are ever-haunting, and the national shame that causes brutal conflicts and global disasters. Shanda is a memoir about secrets that can paralyze us or, when released, help us fly."
— Judy Collins, singer, author, and activist

"Pogrebin divulges her own family's astonishing array of secrets and delves into the annals and anthropology of Judaism and feminism, of fat shaming and sexual shaming, and more. Shanda is a book for anyone who has ever felt or feared shame, which is to say, this is a book for everyone."
— Ellen Goodman, Pulitzer Prize-winning journalist, columnist, and author

"In her revealing memoir, Pogrebin, widely known for her intelligence, style, generosity, and boldness, admits the heavy burden of secrets, including her own which she has long carried. Shanda, her clear-eyed look at one immigrant family's habit of secrecy and fear of shame reveals why a lifetime of trying to uncover hidden truths has informed her insightful books and articles on topics many fear to tackle."
— Ruth J. Abram, historian and Founding President of the Lower East Side Tenement Museum

"Pride may be a deadly sin, but shame is simply deadly. With her trenchant wit and generous heart, Letty Cottin Pogrebin explores the theological and historical imperatives that drove her family to conceal pain and bury truths in service to misguided ideas of propriety and perfectionism. Shanda is a bracing book: both liberating and exhilarating."
— Geraldine Brooks, journalist and Pulitzer Prize-winning novelist

"Pogrebin tells personal stories that, despite their particularity, speak to everyone's experience, and the wisdom she draws from Jewish teachings speaks to readers of any faith tradition or cultural heritage. Like all great memoirs, Shanda is an intimate reflection of the human in all of us."
— David Kraemer, professor of Talmud and Rabbinics, and library director at the Jewish Theological Seminary

"With wit, erudition, and searing honesty, Shanda unfolds like a riveting mystery novel—you can't stop reading until the very end. A powerful subject, treated with sensitivity and grace."
— Francine Klagsbrun, author of "Lioness: Golda Meir" and the "Nation of Israel"