Along for the Ride: Navigating Through the Cold War, Vietnam, Laos & More (Hardcover) 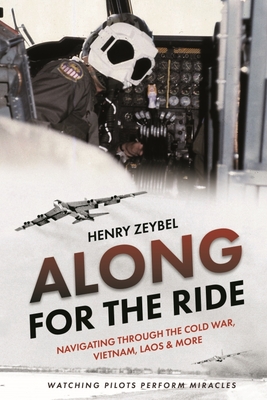 Air Force veteran and novelist Hank Zeybel takes us along for the ride in this memoir of his sorties in Vietnam and beyond.

During Hank Zeybel's first tour in Vietnam he flew 772 C130 sorties as a navigator. He volunteered for a second tour, requesting assignment to B26s so he could "shoot back." When B26s were removed from the inventory, he accepted a Spectre gunship crew slot, flying truck-busting missions over the Ho Chi Minh Trail. He describes the terror of flying through heavy AA fire over the trail, and the heroics of the pilots in bringing their crews through.

Away from the war he recalls leave back in the US, his elderly father bewildered by his war-hardened attitude and black sense of humor. Contextualizing his time with Spectre gunships, he compares his experiences with those of other airmen, like Phil Combies and Robin Olds, and his broader Air Force career--he joined upon graduating university in 1955 and his first operational assignment was as a B47 Stratojet navigator-bomber at Strategic Air Command--trained to drop thermonuclear bombs with precision. From 1957 to 1963, he logged over two thousand hours as a radar-bombardier in B47 Stratojets and B52 C-models. In this memoir of Vietnam, his Air Force career, and his second career as a journalist and writer, Zeybel's admiration of the skill and bravery of pilots--many of whom who he depended on for his very survival--shines through his descriptions of combat missions and being "along for the ride.