Everybody Is Wrong About God (Paperback) 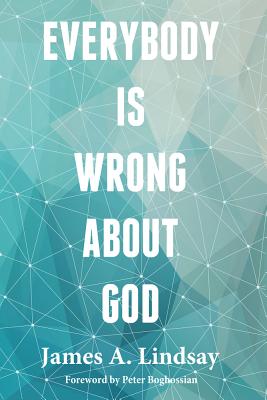 A call to action to address people’s psychological and social motives for a belief in God, rather than debate the existence of God

With every argument for theism long since discredited, the result is that atheism has become little more than the noises reasonable people make in the presence of unjustified religious beliefs. Thus, engaging in interminable debate with religious believers about the existence of God has become exactly the wrong way for nonbelievers to try to deal with misguided—and often dangerous—belief in a higher power. The key, author James Lindsay argues, is to stop that particular conversation. He demonstrates that whenever people say they believe in “God,” they are really telling us that they have certain psychological and social needs that they do not know how to meet. Lindsay then provides more productive avenues of discussion and action. Once nonbelievers understand this simple point, and drop the very label of atheist, will they be able to change the way we all think about, talk about, and act upon the troublesome notion called “God.”

James A. Lindsay holds degrees in physics and mathematics, with a doctorate in the latter. He has authored two previous books, including Dot, Dot, Dot: Infinity Plus God Equals Folly. He lives in Knoxville, Tennessee. Peter Boghossian is the author of A Manual for Creating Atheists.

“A very thought-provoking book, sure to be controversial. I love it!” —John W. Loftus, author, How to Defend the Christian Faith

"There is a new era to come, a new conversation in town, and it doesn’t involve 'God.' Let Lindsay's book be the erudite ice-breaker." —Jonathan MS Pearce, author, The Little Book of Unholy Questions

"Everybody Is Wrong About God is a manifesto; a call to abandon the battle over God, which has already been won and which some are still far too invested in fighting, and move on to the main front in the struggle for the future of all sentient beings . . . . everyone who cares about secularism and humanism should read this book and discuss it vigorously." —Ryan J. Bell, Year Without God