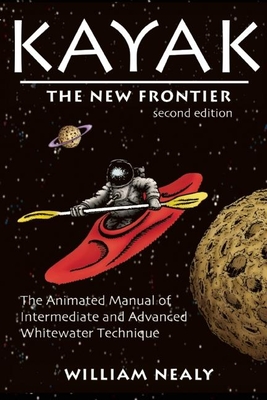 Completely updated to reflect the latest in paddling equipment and kayak technology, William Nealy's illustrated kayaking manual is as practical as it is dead-on hilarious. Whether detailing hardcore hippy hairboaters or insane youngsters clattering tiny play boats down steep, rocky creeks, Nealy is back and more useful and entertaining than ever. Over 400 illustrations help Nealy break down even the most complex kayaking skills, making difficult whitewater techniques understandable. You may break a rib laughing, but with Nealy holding your hand you'll be less likely to break a bone while boofing an insane rapid (or maybe an entire waterfall).

A world famous cartoonist, called the Poet Laureate of the whitewater community, William Nealy became a cult figure in the world of outdoor sports with his combination of instruction and artful caricatures in his paddling and mountain biking manuals. Nealy died in 2001. As an instructor, Nealy's strength lay in his ability to convey in simple terms the often counter-intuitive techniques of adventure sports. Nealy was arguably the best-known ambassador of his sport, entertaining and instructing hundreds of thousands of paddlers through his illustrated books. The success of the first edition of Kayak as an instruction manual hinged squarely on Nealy's ability to convey himself personally to the reader. It is all too obvious that each of the mishaps that befall the illustrated characters populating each of his books happened, in reality, to Nealy himself. That self-effacement, while hilarious, also embodied empathy for the reader and for the mishaps that were sure to befall him as he bounced his or her way down the steep learning curve of the sport. In short, each reader of Kayak, as well as Inline (an inline skating manual) and Mountain Bike, grew to trust Nealy as a teacher because he felt he knew William as a friend.