Our Political Nature: The Evolutionary Origins of What Divides Us (Paperback) 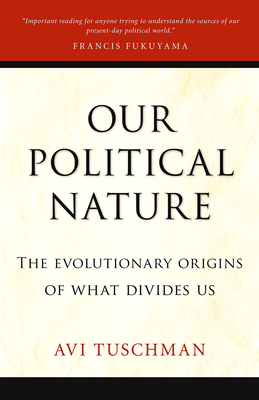 The first book to explore the natural history of political orientations, now with a foreword by Sebastian Junger

By blending serious research with relevant contemporary examples, Our Political Nature casts important light on the ideological clashes that so dangerously divide and imperil our world today. It shows how political orientations arise from three clusters of measurable personality traits that entail opposing attitudes toward tribalism, inequality, and differing perceptions of human nature. Together, these traits are by far the most powerful cause of left-right voting, even leading people to regularly vote against their economic interests. Our political personalities also influence our likely choice of a mate, and shape society's larger reproductive patterns.
Now in paperback with a foreword by Sebastian Junger, author of Tribe, and a new epilogue by the author, this book tells the evolutionary stories of these crucial personality traits, which stem from epic biological conflicts. Based on dozens of exciting new insights from primatology, genetics, neuroscience, and anthropology, this groundbreaking work brings core concepts to life through current news stories and personalities.

Avi Tuschman is an internationally recognized expert on heritable psychometric traits. His research on the bioscience of human political personality has been covered in both mainstream and peer-reviewed media from twenty four countries. Tuschman began his career as the youngest advisor in the government palace in Lima, Peru. He subsequently advised eighteen former heads of state, multilateral banks, and corporations on shaping public opinion. More recently, Tuschman founded Pinpoint Predictive, which has brought to market the first privacy-safe and commercial applications of Psychometric AI. He holds a doctorate in evolutionary anthropology from Stanford University.

—Michael Shermer, publisher of Skeptic magazine, monthly columnist for Scientific American, Presidential Fellow at Chapman University, and author of The Moral Arc and Heavens on Earth

"Tuschman clearly makes a unique and important contribution to the field...[in] this immensely engaging book."

"Tuschman’s book attempts a feat that those of us monitoring the emerging science of politics have long been waiting for—explaining the now well-documented psychological, biological, and genetic differences between liberals and conservatives with reference to human evolution and the differential strategies of mate choice and resource allocation that have been forced on us by the pressures of surviving and reproducing on a quite dangerous planet. . . . If he’s right, a dramatic new window opens on who we are and why we behave as we do."

"Our Political Nature shows us that there are evolutionary underpinnings to our political attitudes, and that being liberal or conservative may reflect much deeper tendencies than we are inclined to think. Important reading for anyone trying to understand the sources of our present-day political world."

"At a time when unexpected political turmoil and economic crashes have exposed how feeble is our understanding of the forces that drive these crises, Our Political Nature provides a welcome respite from the intellectual confusion now reigning. A fascinating perspective on the deepest roots of the clashes that are changing our world."

—Moisés Naím, Distinguished Fellow, Carnegie Endowment, and author of The End of Power

"In a remarkable interdisciplinary tour de force, evolutionary anthropologist Avi Tuschman integrates findings from social psychology, genetics, and neuroscience to provide a rich understanding of the polarization in politics throughout history, and of man's inhumanity to man. In Our Political Nature he makes clear that be it vote choice or the decision to go to war, our politics are the product of the passions that drive us, which are deeply rooted in humanity's evolutionary origins."

--Jerrold M. Post, MD, Director, Political Psychology Program at George Washington University, and author of Leaders and Their Followers in a Dangerous World