Alpha God: The Psychology of Religious Violence and Oppression (Paperback) 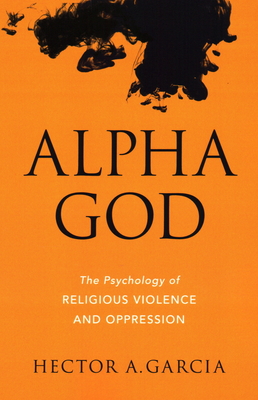 This book uses evolutionary psychology as a lens to explain religious violence and oppression. The author, a clinical psychologist, examines religious scriptures, rituals, and canon law, highlighting the many ways in which our evolutionary legacy has shaped the development of religion and continues to profoundly influence its expression. The book focuses on the image of God as the dominant male in Judaism, Christianity, and Islam. This traditional God concept is seen as a reflection of the “dominant ape” paradigm so evident in the hierarchical social structures of primates, with whom we have a strong genetic connection.

The author describes the main features of male-dominated primate social hierarchies— specifically, the role of the alpha male as the protector of the group; his sexual dominance and use of violence and oppression to attain food, females, and territory; in-group altruism vs. out-group hostility (us vs. them); and displays of dominance and submission to establish roles within the social hierarchy. The parallels between these features of primate society and human religious rituals and concepts make it clear that religion, especially its oppressive and violent tendencies, is rooted in the deep evolutionary past.

This incisive analysis goes a long way toward explaining the historic and ongoing violence committed in the name of religion.

Hector A. Garcia, Psy.D., is an assistant professor in the department of psychiatry at the University of Texas Health Science Center at San Antonio and a clinical psychologist at the Veterans Health Administration specializing in the treatment of combat-related posttraumatic stress disorder (PTSD). He has published extensively on the treatment of PTSD in combat veterans. He has also published on the masculine identity in the aftermath of war, stress and rank in organizations, and the interplay between religious practice and psychopathology.

"Hector A. Garcia has written a brilliant, courageous, and vitally important book about the widespread belief in a single, all-powerful god. Specifically, he has traced that belief to--brace yourselves--our primate origins. Given the fact that religious differences underlie almost all of the world's bloody conflicts, this might be one of the most important topics anyone could tackle. Garcia's research is impeccable, his thesis is staggeringly original, and he writes with breathtaking clarity and insight. It's been a long time since a book has stunned me like this one has."

—SEBASTIAN JUNGER, author of the bestselling books War and The Perfect Storm

“Alpha God is ambitious, provocative, and eminently engaging. Garcia proposes a novel Darwinian hypothesis on a topic—religious violence—that is central to our times. While the details will be disturbing to many, religious violence is an area of inquiry that cannot be ignored, and Garcia offers an abundance of intriguing ideas that will keep researchers busy for years to come.”

"Original, bold, and beautifully written, Alpha God offers a groundbreaking  and eye-opening evolutionary analysis of human religion, explaining not only why religion exists but also why it is the way it is. Armed with broad knowledge of the history, principles, and scriptures of human religions and a deep understanding of evolutionary psychology and nonhuman primate behavior, Hector A. Garcia convincingly argues that religion is built on—and takes advantage of—human (and especially men’s) evolved psychology, particularly our obsession with dominance/submission and sex.”

“I can already hear the true believers and religious apologists snorting that God is more subtle than the dominant alpha male portrayed by Hector A. Garcia, just as we can anticipate the claim that humanity’s sense of God comes not from evolution but from, well, God himself! (Note, by the way, the implication that God is not only male but also a personalized actor.) But the overwhelming majority of believers do in fact personalize God as a dominant alpha male, and, moreover, as this book demonstrates so effectively, our species is predisposed by its evolutionary history to do just this. My guess is that there is more—that is, more biology—behind religious belief than merely the allure of an alpha God, but nonetheless Alpha God goes a long way toward explaining our peculiar vulnerability to such illusions. It’s a superb overview of a compelling hypothesis for the evolution of religion.”