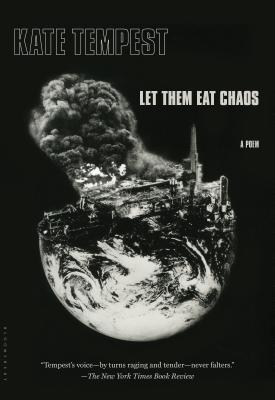 Kae Tempest's powerful narrative poem--set to music on their album of the same title, shortlisted for the Mercury Music Prize--illuminates the lives of a single city street, creating an electric, humming human symphony.

Let Them Eat Chaos, Kae Tempest’s long poem written for live performance and heard on the album release of the same name, is both a powerful sermon and a moving play for voices. Seven neighbors inhabit the same London street, but are all unknown to each other. The clock freezes in the small hours, and one by one we see directly into their lives: lives that are damaged, disenfranchised, lonely, broken, addicted, and all, apparently, without hope. Then a great storm breaks over London, and brings them out into the night to face each other, giving them one last chance to connect.

Tempest argues that our alienation from one another has bred a terrible indifference to our own fate, but counters this with a plea to challenge the forces of greed which have conspired to divide us, and mend the broken home of our own planet while we still have time. Let Them Eat Chaos is a cri de cœur, a call to action, and a powerful poetic statement.

Kate Tempest was born in London in 1985. Her work includes the plays Wasted, Glasshouse, and Hopelessly Devoted; the poetry collections Everything Speaks in its Own Way and Hold Your Own; the albums Everybody Down, Balance, and Let Them Eat Chaos; the long poems Brand New Ancients and Let Them Eat Chaos; and her debut novel, The Bricks that Built the Houses.

“This feels a lot like Patti Smith here, in massive wordplay. The sorrows, loss, and rage are the same; and you have to admire the inner beauty coming to surface in serious ways; and more than that, applaud a young artist on a marvelous occasion for driving a dream to the fullest extent just for the flight of it.” - Washington Review of Books

“Tempest has an ability to write about big, metaphysical subjects in the most vernacular language.” - Michiko Kakutani, New York Times

“Capture[s] a yearning for something better that resonates in this early 21st-century political climate.” - Publishers Weekly

“Tempest is brilliant at painting pictures with words, drawing compelling characters that pull you into their lives.” - Jay Gabler, "The Current", Minnesota Public Radio

“Kae Tempest's skill as a wordsmith will continue to win [them] awards and critical praise, but it's [their] passion as a performer that can carry [them] to a larger audience . . . There are moments in musical history when you can practically feel culture forces coalescing around a voice and a talent on the cusp of a massive breakthrough . . . If [Tempest] continues operating at the stratospheric level on display these last few weeks, [they] should probably get used to it.” - Forbes.com