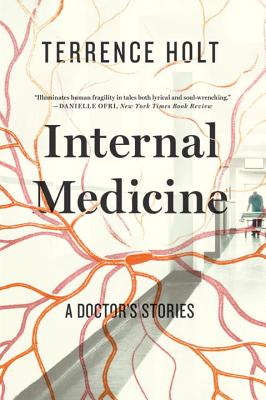 In this “artful, unfailingly human, and understandable” (Boston Globe) account inspired by his own experiences becoming a doctor, Terrence Holt puts readers on the front lines of the harrowing crucible of a medical residency. A medical classic in the making, hailed by critics as capturing “the feelings of a young doctor’s three-year hospital residency . . . better than anything else I have ever read” (Susan Okie, Washington Post), Holt brings a writer’s touch and a doctor’s eye to nine unforgettable stories where the intricacies of modern medicine confront the mysteries of the human spirit. Internal Medicine captures the “stark moments of success and failure, pride and shame, courage and cowardice, self-reflection and obtuse blindness that mark the years of clinical training” (Jerome Groopman, New York Review of Books), portraying not only a doctor’s struggle with sickness and suffering but also the fears and frailties each of us—doctor and patient—bring to the bedside.

Terrence Holt is a writer and an internist specializing in geriatric medicine, teaching and practicing at the University of North Carolina in Chapel Hill.

Whether or not you classify this collection of nine stories as nonfiction, they ring true in both details and spirit, starting with a doctor’s evolution from the first night on call as an intern and ending with ethical questions that a physician ponders 40 months later, his residency complete… Dr. Holt never settles for easy answers, and the questions he poses—reflecting the frequent uncertainties of doctors and patients alike—will leave readers thinking long after the final page is turned.
— Alice Cary - BookPage

Holt, who also holds a master’s in fiction writing and a PhD in literature, is an excellent story teller… [T]he portrait Holt offers is artful, unfailingly human, and understandable.
— Dennis Rosen - Boston Globe

Holt’s new collection of stories, captures the feelings of a young doctor’s three-year hospital residency—the powerlessness, the exhaustion, the chaotic and seemingly endless shifts, and above all, the intensity of being with people in moments of extremity—better than anything else I have ever read… Holt’s unadorned prose and pitch-perfect dialogue contribute to the realism of these stories. At times they have the atmosphere of a hospital version of film noir, the narrator sounding as tough as Raymond Chandler’s Philip Marlowe in his effort to be efficient and unflappable… Anyone who’s considering becoming a doctor, or anyone who wants to know what’s at the core of a doctor’s initiation, should read this book.
— Susan Okie - The Washington Post