The First Fighter Pilot - Roland Garros: The Life and Times of the Playboy Who Invented Air Combat (Hardcover) 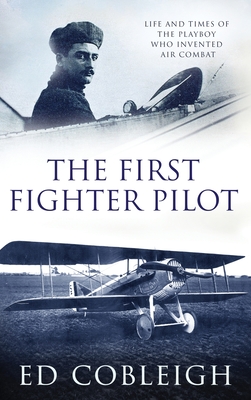 Roland Garros enjoyed an exciting life. An aviation pioneer in the early 1900s, he taught himself how to fly a bamboo airplane despite crashing it at Versailles. He was a world-class athlete, a lawyer who wouldn't learn Latin, a sports car salesman on the Champs-Elys es, an airshow pilot and racer. He demonstrated flight to huge crowds up and down the Americas. Ultimately, Roland Garros became the world's first fighter pilot.

Leaving his comfortable life in Paris, he flew and fought in the lethal skies of the first World War. Never before had a lone pilot hunted other men in the air. Shot down and captured, he escaped prisoner of war camp, evaded his way across Germany, and crossed the front lines. After a torrid fling in Paris with an exotic dancer, he rejoined his squadron. Garros needed two more aerial victories to become an ace.

This creative non-fiction biography puts you in an open cockpit, in air combat, and in Paris experiencing Belle Epoque pleasures. What was it like to fly across the Mediterranean in a rickety monoplane? How did pilots dogfight in WWI? Fasten your seatbelt for exciting aerial action and the adventure-packed life of Roland Garros, the first fighter pilot