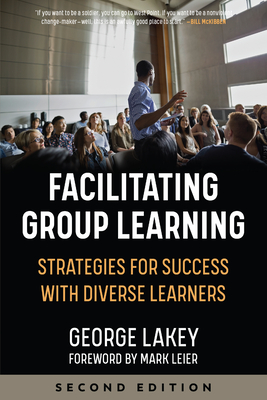 By George Lakey, Mark Leier (Foreword by)
$20.00
On Our Shelves Now

I've had the great blessing of taking several "Train the Trainer" activist workshops with George Lakey leading. I've also had the great blessing of hanging out with him and a bunch of other folks at David Hartsough's home in San Francisco singing Broadway tunes with George at the piano. In all of my years of teaching and learning I've never encountered a better facilitator/teacher than George Lakey. When he told us that his book, Facilitating Group Learning, had gone out of print and he was looking for a publisher, we jumped right in and got PM Press immediately on the hook.

George Lakey, through countless workshops, classes, gatherings, has learned how to help groups, and the individuals who make up those groups, become superstars of activism. Whether they're working on climate change, anti-racism, peacemaking between warring people, global justice, government formation or reformation... you name the movement, thousands of activists have either been trained by George or by those who, like me, have benefited from train the trainers.

If you are someone who manages and leads activists, this book will help you help them excel beyond even your wildest imagination. If you are an activist who wants to get the most out of any training, workshop, or gathering, there is gold in this book for you too!

The title of this book is hiding the actual revolution you'll find within its pages, a revolution of how we start a movement, feed a movement, shape a movement, and with all the right tools, how we win. Right now we NEED to win against very difficult odds and this book is one of the greatest tools you can add to your nonviolent toolbox. Bill McKibben said it perfectly in his blurb for the book: "If you want to be a soldier, you can to to West Point. If you want to be a nonviolent change-maker, well, this is an awfully good start!"

During most workshops there's a daily ritual of stopping everything and checking in with folks to see how they are all experiencing things. It is a time when you can raise concerns, share special insights, ask questions about things you found confusing, just about anything. As we went around the circle on the 4th day of training and it was my turn to speak, I said "You know, I've been teaching groups for around 15 years now, and in every single group there was always one, OK, I'll say it, asshole." Everyone looked at me, I'm sure, wondering where I was going. "I've never been in a group like this one where I have so much respect for every single one of you. I've learned something from each of you and have enjoyed every single interaction. So, I guess this time, here at this training, I must be the asshole!"

What Do You Need?

The next story is more poignant. We'd been through a bunch of exercises and were talking about one of them when someone said "This is really high wire for me." I'd heard someone else say "high wire" earlier in the workshop and although I was pretty sure I knew what it meant I decided to ask. George reached behind him and pulled out a milk crate. "OK, what if I told you that we were going to walk over to the corner of 16th and Mission, and each one of you was going to have to stand up on this milk crate and speak to the people walking by?" Yes, for some of us that would be really scary, like being at the circus on a high wire without a net. "I understand!" I told George, "that could be really scary but it is something you might have to do to get something done, to get someone to listen." George said "Exactly. And that's what we're going to do right now."

He was serious! We gathered ourselves and walked over to the corner of 16th and Mission, one of the busiest intersections in San Francisco, and we each had to get up on that milk crate and get people's attention and tell them something. Smartass that I am, I stood up and announced my bid for President of the United States. My platform? No more arms sales. "And, while we're at it, I think we should ban the sales of all body parts, not just arms." I got some laughs.

One young woman, when it was her turn, was literally shaking. She got up on the box and tried to speak, but started crying. We helped her down and consoled her, encouraged her.

Others took their turns. While someone else was up on the box I spotted a man and a woman who looked upset with each other. The man was particularly angry, his face getting red. As I watched it became clear that he was about to hit her. Part of the training that I'd had was how to intervene in a violent situation and stop the violence from happening. So, high wire as it was, I rushed over and got near the two of them and said "Hey! What are you two doing here! I can't believe I ran into you! Is everything OK?" My sudden appearance broke the violence of the moment. They both looked at me like I was crazy. I asked again "Hey, is everything OK, is there anything I can do to help?" He said "No, everything's OK" and he looked at her with more softness and she nodded and said "Yeah, we're OK." I said "OK then! Good seeing you. I'm just over there with my friends if you need anything."

I walked back over and joined the group. Just as I did it was the young lady's turn again to get on the box. We encouraged her, cheered her on, and she got up on the box. She was quiet for almost a minute and then, she looked right at a man who was walking by and she said "Excuse me! Can I ask you a question?" He stopped and looked up. "What do you need, is there anything you need?" He responded "I need a job?" She said "Then why don't you get on this box and tell people! Maybe someone walking by has a job for you. Come on get up here!" And he did.

Training a bunch of very diverse activist trainers, trying to get even better at their craft, can lead to some pretty intense experiences. At times the tension in the room can be very thick and something needs to happen to break that tension, especially if and when most of the people in the room don't understand what's causing that tension. One person in particular, on the third day of a workshop, seemed incredibly tense and finally, when it was time for a checkin, she let us know what was bothering her. Looking back and forth between George and me she said "I'm really sick of gray-haired wealthy straight white men thinking they run everything. You don't let anyone else talk!" Looking right at George she then said "You keep on interrupting me and it isn't right! I'm ready to leave right now because I'm not getting anything out of this workshop."

George, who had leaned in and intently looked at her while she spoke, clearly listening to every word, waited a few moments after she was done. "Wow." He said. More quiet for a few moments. "I'm really glad you were able to tell us how you were feeling." He said and then paused again. "But I do have to tell you that I think you're making assumptions about me and others that aren't true. I'm neither straight or wealthy." He looked over at me and signalled that if I wanted to I could say something. "Me either." I said. He went on. "My style of talking comes from a lifetime of family dynamics. I jump in when I get excited. I do interrupt." Then to the group "Do others feel like I was interrupting anyone in particular too much or did I do it to all of you?" Some chuckling. Yes, we had all noticed his style. "It's important for colleagues to understand each other's communication styles so I'm glad you let me know yours and that mine was troublesome. I'll keep that in mind when I work with you." Again, a pause. "I do have one question though, you're talking about leaving the workshop. You're surrounded by people who care about the same things you do, social justice activists who are trying to change the world. If you're not comfortable standing up to us, speaking your mind with us, what will you do when you're at a table where the rest of the people really do want to marginalize you?"

Wow: As a student of active listening, watching George actively listening and seeing how he reacted taught me more in a few minutes than I had learned in a lifetime. By leaving space after she had finished speaking, and then just saying "Wow" in response, George let her and all of us know that he had really heard what she was saying. Right there I realized that he hadn't been sitting there while she was speaking trying to figure out how he was going to respond, what he was going to say next. That would come later, after he fully heard her out. Then, after a pause, he responded thoughtfully, honestly, not at all defensively. In the years since that training I've used "Wow" dozens of times in tense situations. I've always said of workshops, classes, trainings... if you learn one golden nugget of a thing during one, the entire time is worth it. Wow.

If you want to make a difference in this topsy turvy world this book can help.

Thank you George Lakey for inviting us to keep this book alive!!

George Lakey presents the core principles and proven techniques of direct education, an approach he developed for effectively teaching adults in groups. To illustrate how it works in action, Lakey includes a wealth of compelling stories from his vast experience facilitating groups in a variety of situations. Direct education cuts through the pretense and needless complications that can distance learners from subject matter. This approach focuses the encounter between teacher and group; it replaces scattered attention with gathered attention. Unlike in other books on group facilitation, the author emphasizes critical issues related to diversity, as well as authenticity and emotions. Step by step, this groundbreaking book describes how to design effective learning experiences and shows what it takes to facilitate them. Ultimately, it brings all the elements of the author's direct education approach together. Facilitating Group Learning also contains material on sustaining the educator, addresses working with social movements, and includes the Training for Change toolkit of group learning techniques.