The Sociology of Freedom: Manifesto of the Democratic Civilization (Paperback) 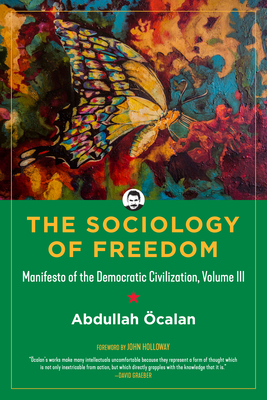 When scientific socialism, which for many years was implemented by Abdullah Öcalan and the Kurdistan Workers' Party (PKK), became too narrow for his purposes, Öcalan answered the call for a radical redefinition of the social sciences. Writing from his prison cell, he offered a new and astute analysis of what is happening to the Kurdish people, their freedom movement, and future prospects for humanity. The Sociology of Freedom is the third volume of a five-volume work titled The Manifesto of the Democratic Civilization. The general aim of the earlier volumes was to clarify what power and capitalist modernity entailed. Here, Öcalan presents his thesis of the Democratic Civilization, based on his criticism of Capitalist Modernity. This volume reveals the remarkable range of one of the Left's most original thinkers with topics such as existence and freedom, nature and philosophy, anarchism and ecology. Recognizing the need for more than just a critique, he has advanced what is the most radical, far-reaching definition of democracy today and argues that a democratic civilization, as an alternative system, already exists, though systemic power and knowledge structures, along with a perverse sectarianism, do not allow it to be seen. This monumental work gives profuse evidence of his position as one of the most influential thinkers of our day.

Abdullah Öcalan actively led the Kurdish liberation struggle from 1978 until his abduction in February 1999. John Holloway is a professor of sociology at the Instituto de Ciencias Sociales y Humanidades in the Benemérita Universidad Autónoma de Puebla, Mexico. He has published widely on Marxist theory, on the Zapatista movement and on the new forms of anticapitalist struggle. He is the author of Change the World without Taking Power and Crack Capitalism.