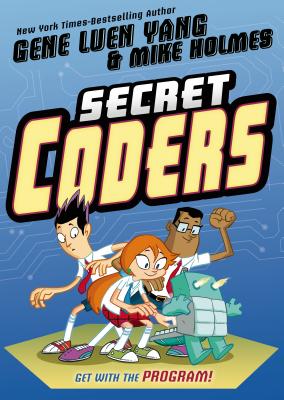 This is book number 1 in the Secret Coders series.

Welcome to Stately Academy, a school which is just crawling with mysteries to be solved! The founder of the school left many clues and puzzles to challenge his enterprising students. Using their wits and their growing prowess with coding, Hopper and her friend Eni are going to solve the mystery of Stately Academy no matter what it takes!

"Gene Luen Yang’s talent is prodigious, his enthusiasm contagious....Even this confirmed technophobe was ready to learn coding." —Katherine Applegate, author of Crenshaw and The One and Only Ivan
"Gene Yang brings computer coding to life." —Entertainment Weekly

"Secret Coders not only uses Logo but also touches on computer fundamentals like binary code and the three major ways that code is organized:sequence, iteration, and selection. By the end of Secret Coders, readers will learn them all, right alongside Hopper and Eni, not as something dry or rote, but something transformative." —Wired

"Yang and Holmes do such a great job explaining the concepts that even programming newbies will be likely to catch on. A cliff-hanger ending hints at deepening mysteries to come." —Booklist

"Holmes’s bold cartoony illustrations are a natural fit for Yang’s geeky enthusiasm, and their combined effort offers an enticing first taste of coding that may very well yield some converts." —Publishers Weekly

"An excellent first purchase that introduces readers to the power of computer programming through an engaging graphic mystery." —School Library Journal

"Convincing kids that coding “truly is magic” is Yang’s and Holmes’s agenda here, and their series opener certainly does the trick." —The Horn Book