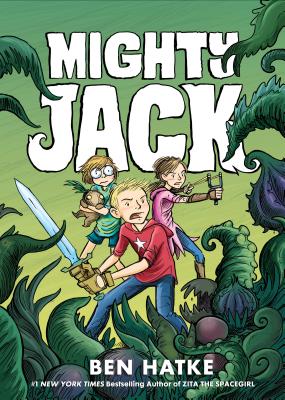 This is book number 1 in the Mighty Jack series.

Jack might be the only kid in the world who's dreading summer. But he's got a good reason: summer is when his single mom takes a second job and leaves him at home to watch his autistic kid sister, Maddy. It's a lot of responsibility, and it's boring, too, because Maddy doesn't talk. Ever. But then, one day at the flea market, Maddy does talk—to tell Jack to trade their mom's car for a box of mysterious seeds. It's the best mistake Jack has ever made.

In Mighty Jack, what starts as a normal little garden out back behind the house quickly grows up into a wild, magical jungle with tiny onion babies running amok, huge, pink pumpkins that bite, and, on one moonlit night that changes everything…a dragon.

Ben Hatke is the author and illustrator of the New York Times–bestselling Zita the Spacegirl trilogy, the picture books Julia's House for Lost Creatures and Nobody Likes a Goblin, and the graphic novels Little Robot and Mighty Jack. He lives and works in the Shenandoah Valley with his wife and their boisterous pack of daughters.

"Ben Hatke has a knack for writing stories that focus on smart, young characters who become caught up with robots, mythical creatures, and alien invasions. Mighty Jack is no exception." —Entertainment Weekly

"This first in a series flourishes up to its nail-biting cliffhanger: expect interest for the subsequent offering to positively bloom. Very mighty indeed."—Kirkus, starred review

"With expert visual storytelling, an empowering team of kid adventurers, and a tantalizing cliff-hanger, this series starter will easily please Hatke’s legion of followers."—Booklist