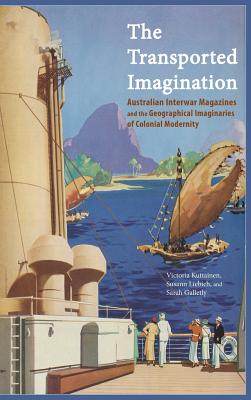 In the early twentieth century, new technologies of media, communication, and transportation opened up a world of possibilities and led to transformations of the public sphere. Amongst the hundreds of new periodicals flooding the Australian marketplace, quality culture and leisure magazines beckoned to readers with the glamour of modernity and exotic images of pre-modern paradise. Through instructive and entertaining content, these glossy modern magazines widened the horizons of non-metropolitan audiences and connected readers in rapidly urbanising cities such as Sydney and Melbourne with the latest fashions, current affairs, and cultural offerings of London, Paris, New York, Los Angeles, and beyond. Designed by fashionable commercial artists, travel advertisements for shipping companies such as Burns Philp, Cunard, Matson, and P&O lined their pages. The golden age of the culture and leisure magazine coincided with the golden age of sea travel, middlebrow aspiration, and modernity.

Focusing on the Australian interwar periodicals The Home, The BP Magazine, and MAN, this book explores the contraction of vast geographical spaces and the construction of cultural hierarchies alongside the advent of new media. This book investigates the role tastemaking culture and leisure magazines played in transporting the public imagination outward beyond the shores of Australia and upward or downward on the rapidly changing scales of cultural value. By delivering a potent mix of informative instruction, entertainment, worldliness, and escape, these magazines constructed distinct geographical imaginaries connected to notions of glamour, sophistication, and aspiration. They guided their readers through the currents of international modernity and helped them find their place in the modern world.

This book is based on thorough research into an archive of important yet under-examined modern Australian periodicals, and makes a significant contribution to the scholarly literature on magazines and middlebrow culture in the interwar period. It offers new insights into the formation of the tastes of a rapidly modernising and differentiating reading public, as well as new understandings of the cultures of vernacular modernity and colonialism. This book also offers alternative perspectives, and positions Australia's cultural and literary history within transnational cultural flows across the Indian and Pacific Oceans. Its analysis of Australian colonial modernity thus provides a model for examining collisions of modernity and colonialism, and for investigating connections between geographical imaginaries and social mobility, in other international contexts.

The Transported Imagination will appeal to a wide range of scholars. Primary audiences are scholars of Australian cultural and literary history; and scholars of print culture, reading history, the middlebrow, mobility studies, media history, and colonial modernity in other national or local milieus. Written in a fluid, reader-friendly style, this book will also appeal to the general reader, and is of special relevance to a range of university courses and students whose research focuses on print culture, periodical studies, or travel in the context of modernism and modernity.