The Civil War Memoir of a Boy from Baltimore: The Remembrance of George C. Maguire, Written in 1893 (Voices of the Civil War) (Hardcover) 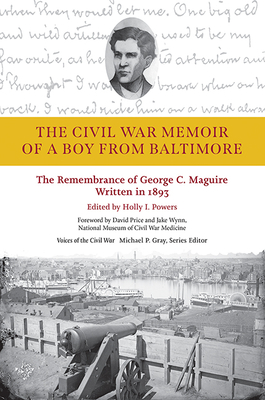 Fourteen-year-old George Maguire was eager to serve the Union when his home state, Maryland, began raising regiments for the coming conflict. Too young to join, he became a “mascot” for the Fifth Maryland Infantry Regiment, organized in September 1861. Although he never formally enlisted or carried a weapon, Maguire recounts several pivotal events in the war, including the sea battle of the Monitor vs. Merrimac, Peninsula Campaign action, and the Battle of Antietam.

During middle age, Maguire recorded his memoir—one of the few from a Maryland unit—providing a distinctive blend of the adventures of a teenage boy with the mature reflection of a man. His account of the Peninsula Campaign captures the success of the mobilization of forces and confirms the existing historical record, as well as illuminating the social structure of camp life. Maguire’s duties evolved over time, as he worked alongside army surgeons and assisted his brother-in-law (a “rabid abolitionist” and provost marshal of the regiment). This experience qualified him to work at the newly constructed Thomas Hicks United States General Hospital once he left the regiment in 1863; his memoir describes the staffing hierarchy and the operating procedures implemented by the Army Medical Corps at the end of the war, illuminated with the author’s own sketches of the facility.

From the Pratt Street riot in Baltimore to a chance encounter with Red Cross founder Clara Barton to a firsthand view of Hicks Hospital, this sweeping yet brief memoir provides a unique opportunity to examine the experiences of a child during the war and to explore the nuances of memory. Beyond simply retelling the events as they happened, Maguire’s memoir is woven with a sense of remorse and resolve, loss and fear, and the pure wonderment of a teenage boy accompanying one of the largest assembled armies of its day.