The Simpsons and Their Mathematical Secrets (Hardcover) 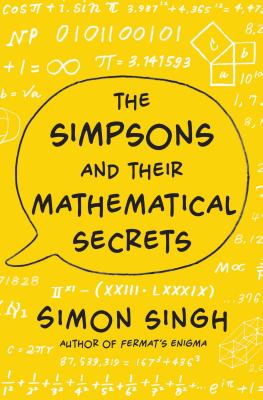 This makes a great gift for someone who loves math and also loves The Simpsons and Futurama. Little known fact: many of the folks on the production staff for these shows went to MIT and laid plenty of science and math Easter Eggs throughout the shows. This book reveals and explains many of them!

You may have watched hundreds of episodes of The Simpsons (and its sister show Futurama) without ever realizing that cleverly embedded in many plots are subtle references to mathematics, ranging from well-known equations to cutting-edge theorems and conjectures. That they exist, Simon Singh reveals, underscores the brilliance of the shows' writers, many of whom have advanced degrees in mathematics in addition to their unparalleled sense of humor.
While recounting memorable episodes such as “Bart the Genius” and “Homer3,” Singh weaves in mathematical stories that explore everything from p to Mersenne primes, Euler's equation to the unsolved riddle of P v. NP; from perfect numbers to narcissistic numbers, infinity to even bigger infinities, and much more. Along the way, Singh meets members of The Simpsons' brilliant writing team-among them David X. Cohen, Al Jean, Jeff Westbrook, and Mike Reiss-whose love of arcane mathematics becomes clear as they reveal the stories behind the episodes.
With wit and clarity, displaying a true fan's zeal, and replete with images from the shows, photographs of the writers, and diagrams and proofs, The Simpsons and Their Mathematical Secrets offers an entirely new insight into the most successful show in television history.

Simon Singh received his Ph.D. in particle physics from the University of Cambridge. A former BBC producer, he directed the BAFTA Award–winning documentary Fermat's Last Theorem and wrote Fermat's Enigma, the bestselling book on the same subject. His bestseller The Code Book was the basis for the Channel 4 series The Science of Secrecy. His third book, Big Bang, was also a bestseller, and Trick or Treatment: The Undeniable Facts About Alternative Medicine, written with Edzard Ernst, gained widespread attention. Singh lives in London.

“The clarity of his explanations is impressive, and there are some illuminating interviews with Simpsonswriters…this is a valuable, entertaining book that, above all, celebrates a supremely funny, sophisticated show.” —Financial Times

“What have Homer and Bart got to do with Euler's equation, the googolplex or the topology of doughnuts? The writers of The Simpsons have slipped a multitude of mathematical references into the show. Simon Singh has fun weaving great mathematics stories around our favourite TV characters.” —New Scientist