The Man Who Invented Fiction: How Cervantes Ushered in the Modern World (Hardcover) 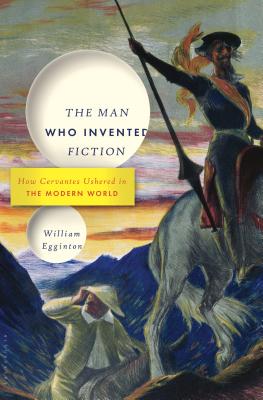 In the early seventeenth century, a crippled, graying, almost toothless veteran of Spain's wars against the Ottoman Empire published a book. It was the story of a poor nobleman, his brain addled from reading too many books of chivalry, who deludes himself that he is a knight errant and sets off on hilarious adventures. That book, Don Quixote, went on to sell more copies than any other book beside the Bible, making its author, Miguel de Cervantes, the single most-read author in human history. Cervantes did more than just publish a bestseller, though. He invented a way of writing. This book is about how Cervantes came to create what we now call fiction, and how fiction changed the world.

The Man Who Invented Fiction explores Cervantes's life and the world he lived in, showing how his influences converged in his work, and how his work--especially Don Quixote--radically changed the nature of literature and created a new way of viewing the world. Finally, it explains how that worldview went on to infiltrate art, politics, and science, and how the world today would be unthinkable without it.

William Egginton is Andrew W. Mellon Professor in the Humanities and Chair of the Department of German and Romance Languages and Literatures at Johns Hopkins University, USA. He is the author of In Defense of Religious Moderation, How the World Became a Stage, Perversity and Ethics, A Wrinkle in History, The Philosopher's Desire, and The Theater of Truth. He is also the coeditor of Thinking with Borges and The Pragmatic Turn in Philosophy. Egginton writes for the digital salon Arcade, published by Stanford University, and The Stone, an online forum for contemporary philosophers published by the New York Times. His intellectual biography of Cervantes, The Man Who Invented Fiction, will be published by Bloomsbury in 2014.

"A heroic history of novel-reading itself." —The Atlantic

"The tale of Cervantes himself is told with impressive acuity, thoroughness and exactitude by Egginton in his uncommonly full and readable book about genius." —Buffalo News, Editor's Choice

“Egginton shines in his literary analysis, teasing out Cervantes’s genius in accessible prose and showing how Don Quixote paved the way for modern fiction by exploring its characters’ inner lives . . . An entertaining and thought-provoking reading of Cervantes’s masterpiece.” —Publishers Weekly

"A celebration of a beloved novel and its innovative author . . . Egginton's well-informed history of 16th-century Spanish life, politics, and culture makes for an engrossing read." —Kirkus Reviews

"William Egginton has written an engaging and enlightening book on the pivotal role of Miguel de Cervantes in the development of western literature. He amply justifies the truth of his wonderfully provocative title." —Edith Grossman, renowned translator of, among other Spanish language masterpieces, DON QUIXOTE

"A poignant account of Don Quixote . . . The Man Who Invented Fiction is a worthy memorial to the eternal achievement that Cervantes wrought out of his own suffering and hard-won wisdom." —Harold Bloom, Sterling Professor of Humanities, Yale University, and author of THE WESTERN CANON

"As this book shows us, Cervantes doesn’t simply predate our idea of fiction; he conditions it, gives it form, makes it possible. In this sense, the present book can be understood as a genealogy of the literary imagination and its suffering father… An entertaining, intelligent, solidly documented study." —Andrés Neuman, novelist, author of TRAVELER OF THE CENTURY, winner of the Alfaguara Prize

"Did Cervantes truly invent fiction? William Egginton argues persuasively that the publication of Don Quixote in 1605 has transformed the way people have read, written, and thought ever since—after all, the Knight of the Mournful Countenance has beguiled admirers as diverse as Descartes, Hume, Marx, Borges, and Graham Greene. Egginton presents Cervantes as an author of rare compassion, a man whose tempestuous, difficult life was somehow essential to forging his transcendent creation, the inseparable duo of Don Quixote and Sancho Panza, whose bond of friendship upends the cruel conventions of sixteenth-century picaresque novels in order to rejoice in the power of individual conviction. Like Don Quixote, The Man Who Invented Fiction is an inspirational adventure story." —Ingrid D. Rowland, Professor of Architecture, University of Notre Dame, and author of GIORDANO BRUNO: PHILOSOPHER/HERETIC

"The Man Who Invented Fiction weaves a compelling tapestry of adventures in reading. Told with great panache, William Egginton’s presentation combines a unique understanding of Cervantes’s life, art, times, and the cultural debates that shaped his revolutionary fiction. It is essential reading." —Marina S. Brownlee, Robert Schirmer Professor of Spanish and Comparative Literature at Princeton University, and author of THE POETICS OF LITERARY THEORY IN LOPE AND CERVANTES

"The Man who Invented Fiction is a wonderful reflection on the impact of life on literature and literature on life, a poetic and evocative meditation that succeeds at offering a detailed and nuanced look at the Spain of Cervantes. Ambitious yet highly accessible, Egginton’s book will become a great companion for scholars and students, as well as for all those simply interested in a novel that remains as relevant as ever." —Enrique García Santo-Tomás, Frank P. Casa Collegiate Professor of Spanish, The University of Michigan, Spanish poet, essayist, and literary critic and author of many studies on Spanish literature

"Elegantly woven into his riveting account of Miguel de Cervantes’ astounding life and adventures is a profound analysis and redefinition of one of the modern world's most important modes of organizing experience: fiction." —Gianni Vattimo, renowned Italian philosopher, Emeritus Professor of Philosophy at the University of Turin, and author of ART'S CLAIM TO TRUTH

"The Man Who Invented Fiction is a fascinating, one-of-a-kind book. While Cervantes and his time come alive like never before in this rich, perceptive, and finely layered intellectual history, readers will be even more appreciative for the opportunity to re-imagine their own world through Cervantine eyes. Egginton’s new book is a deeply insightful and riveting read, a model for the type of scholarship that we associate with the public humanities." —David R. Castillo, Professor Romance Languages & Literatures, University at Buffalo, and author of BAROQUE HORRORS

"Egginton's book is not simply a new interpretation of Miguel de Cervantes's fundamental text; it is also a new interpretation of his life and epoch as central to understanding how he invented what we now call fiction. This invention, which is at the center of Egginton's outstanding intellectual biography, is vital for everyone who still believes in the power of the arts in the 21st century." —Santiago Zabala, ICREA Research Professor of Philosophy at Pompeu Fabra University, and author of THE REMAINS OF BEING

"The Man Who Invented Fiction shows what literary criticism has become able to do for non-professional and for academic readers alike, after an era of intense theory debates. It is an invitation to deeply immerse oneself into the early seventeenth century world of a veteran from the Spanish crown's imperial wars; and as this veteran is Miguel de Cervantes, the author of Don Quixote, the reader re-emerges from that past made present with a graspable but fully developed philosophy of what it is all about to engage in fiction under the conditions of Modernity." —Hans Ulrich Gumbrecht, Albert Guérard Professor of Literature, Stanford University

"William Egginton offers a brilliant synthesis of the life and work of Miguel de Cervantes as he paints the engaging story of the birth of modern fiction and, in turn, of modern thought. With a nuanced grasp and engaging presentation of theory and philosophy, Egginton clearly details how and why Cervantes was a game-changer. History, politics, philosophy, and literature are beautifully combined in this ingenious exploration of Cervantes’ historical actuality, technical prowess, and artistic literary invention, as Egginton brings the author’s full story up to date and convincingly argues for its splendid vitality." —Susan Byrne, Associate Professor of Spanish, Yale University, and author of LAW AND HISTORY IN CERVANTES'S DON QUIXOTE

"An exceptionally readable account of Cervantes’s literary career . . . Those reading William Egginton’s study with fresh eyes will find much to whet the appetite." - Times Literary Supplement