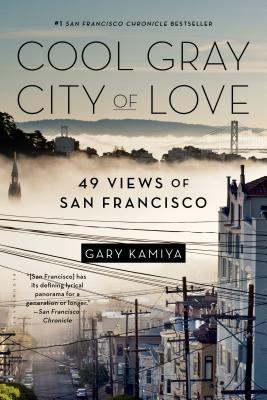 I personally give this book to one of two people: someone who really loves San Francisco or a friend that left the Bay Area and I want to make homesick.

The bestselling love letter to one of the world's great cities, San Francisco, by a life-long Bay Area resident and co-founder of Salon.

Cool, Gray City of Love brings together an exuberant combination of personal history, deeply researched history, in-depth reporting, and lyrical prose to create an unparalleled portrait of San Francisco. Each of its 49 chapters explores a specific site or intersection in the city, from the mighty Golden Gate Bridge to the raunchy Tenderloin to the soaring sea cliffs at Land's End. Encompassing the city’s Spanish missionary past, a gold rush, a couple of earthquakes, the Beats, the hippies, and the dot-com boom, this book is at once a rambling walking tour, a natural and human history, and a celebration of place itself—a guide to loving any city more faithfully and fully.

For readers of E. B. White's Here is New York, Jose Saramago's Journey to Portugal, or Alfred Kazin's A Walker in the City, Cool, Gray City of Love is an ambitious, insightful one-of-a-kind book for a one-of-a-kind city.

Gary Kamiya was born in Oakland in 1953, grew up in Berkeley, and has lived in San Francisco since 1971. He cofounded Salon.com, where he was executive editor for twelve years and then a columnist. His first book, Shadow Knights: The Secret War Against Hitler, was a critically-acclaimed history of Britain's top secret Special Operations Executive. Kamiya is currently executive editor of San Francisco Magazine.

“How do I love thee? In Cool Gray City of Love Gary Kamiya crushes on San Francisco in 49 different ways--from its landscapes and architecture to a fabled past encompassing the Gold Rush, Beats and hippies, the AIDS crisis, and dot.com mania. Now that's love and devotion.” —Vanity Fair

“Written in a confessional first-person tone that invokes a conversation between two old friends: Kamiya and the city he has called home for over 40 years . . . impressive is the author's uncanny grasp of the bay's natural history and the way that the landscape continues to shape the lives of current San Franciscans . . . Kamiya has written a fitting ode to an exceptional city.” —Publishers Weekly

“Kamiya's relish is contagious . . . [San Francisco] has its defining lyrical panorama for a generation or longer.” —San Francisco Chronicle

“Newcomers to San Francisco fall in love with the city every day, but no one can appreciate it quite like a longtime resident. Kamiya proves an ardent, expert guide to his hometown's history, neighborhoods and landmarks . . . Cool Gray City of Love will open your eyes anew.” —San Jose Mercury News