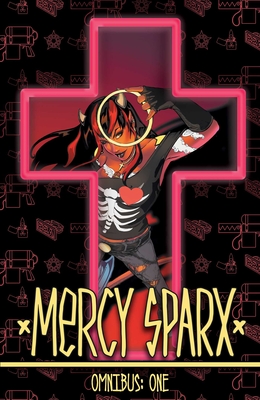 This is book number 1 in the Mercy Sparx series.

Four hundred pages! Heaven's secret bounty hunter is actually a Devil working on their side. Disguised as a human living on Earth, she hunts down rogue angels, doing Heaven's dirty work. Collects the original miniseries, issues #1-9 of the ongoing series, and the Hack/Slash crossover "A Slice of Hell."

Josh Blaylock has been a nationally recognized comic book author and artist since his self-publishing debut in 1996. His fame rose in the early 2000s with the formation of Devil’s Due Comics, and the acquisition of the then-dormant G.I. Joe comic book license, which he re-launched in partnership with Image Comics to the top of the charts, and ignited an entire resurgence of 1980s cartoon properties in the comic book space. In addition to dozens of different comic books written in his career, his creator-owned series Mercy Sparx, published by Devil’s Due, was optioned for film by MGM Studios in 2020. Other notable work includes the political tribute (and satire) Alexandria Ocasio-Cortez and the Freshman Force: New Party, Who Dis? (receiving over 1 billion media impressions around the globe),  the graphic novel  thriller Operation Nemesis, commemorating the 100th anniversary of the Armenian Genocide, and the non-fiction prose How to Self-Publish Comics: Not Just Create Them (made required reading at Savannah College of Art & Design). Outside of comics, Blaylock is a recognized expert in the cryptocurrency space, leading to the creation of The Bitcoin Comic Handbook, a guide to understanding the disruptive technology. Josh’s current active comic book projects continue to be Mercy Sparx and the sci-fi / fantasy series ArkWorld  and The Encoded.

Matt Merhoff is a comic book artist and illustrator from Los Angeles. He is best known for his work on Mercy Sparx with Josh Blaylock. When not drawing he enjoys watching costumed people punch and kick each other.

Hoyt Silva was born in 1987 in New York City, Astoria, Queens to be exact. Since then, Hoyt's life and career path have taken hil all over the United States from Pennsylvaia, Florida, California, and to his current residence in Atlanta, Georgia.

After meeting his mentor, teacher, and close friend Brian Selfreeze, in 2011 at a convention in San Francisco, Hoyt has continued to grow and evolve bringing new innovation and dramatic storytelling to the comics medium. Using a unique style influenced by the lifes of Stelfreeze, Rob Hanes, and Mike Mignola to name a few. Hoyt, has crafted something very much his own and he's always looking forward to whatever sprouts up next.

Daniel Leister was born in Germany in 1976. He has been drawing most of his life,but didn’t get into comics till around his 5th grade year. He moved from California to Maryland with his family, but didn’t know anyone or have anything to do. His mother bought him his first comic and that was it for him.

After High school he attended the Ohio State University and received his B.F.A. in 2000.  Daniel spent may years going to conventions and trying to get a job in comics, but his first break was a talent contest by Marvel at a convention. He came in second place and was offered work by the company After Hours Press. His real break into the professional world of comics came when he was offered the penciling job for the ‘Wonderland’ series for Zenescope Ent.

He spent 3 years working on the trilogy and then moved to Hack/Slash with writer Tim Seeley. Daniel is now working on various independant projects including something new for Devils Due.

He currently resides in Columbus, Ohio with his Wife and Son.

Greg and Fake are American illusionists and entertainers who have performed together since the late 1970s, noted for their ongoing act which combines elements of comedy with magic. The duo, having been featured in numerous stage and television shows.   Greg serves as the act's orator and raconteur. Fake, however, generally does not speak while performing, and instead communicates through mime and nonverbals, although his voice can occasionally be heard during their live shows and television appearances. Besides magic, the pair have recently become associated with their advocacy of atheism, scientific skepticism, and libertarianism.