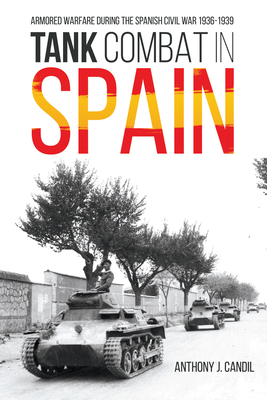 ...offers important insight into the employment of tanks during the war, lessons learned (or not learned) by the participating armed forces... -- Globe at War

Although Spain had been for many years on the periphery of the great affairs of Europe, within a few months of the Civil War breaking out in 1936, three out of the four major European powers--Italy, Germany, and the Soviet Union--decided to intervene. Spain turned out to be the perfect proving ground to carry out controlled, realistic experiments with live weapons and troops. This book covers the theories of the three main contributors that provided armor to the warring parties in the civil war, how those contributions shaped combat, and how the lessons learned were then applied to tank combat in World War II.

The use of tanks in the Spanish Civil War wedded traditional war to modern technology. The fighting in Spain did not offer any easy answers, however, to the question of infantry-armor cooperation, primarily because the tanks supplied were not very worthy and had been supplied in small numbers, even though the Republicans organized an 'armored division.' The situation for the tanks on the Nationalist side was so bad in practical terms that they reused captured Russian armor in their units. Tank employment in Spain did offer many lessons, but the lessons did not always lie in what was done or accomplished but precisely on what was not done and was not accomplished.