How We Became Human: Mimetic Theory and the Science of Evolutionary Origins (Studies in Violence, Mimesis & Culture) (Paperback) 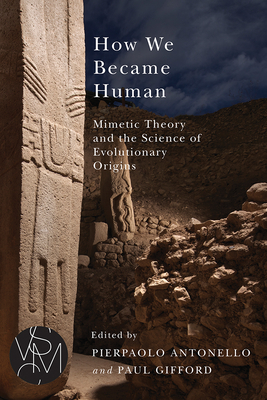 From his groundbreaking Violence and the Sacred and Things Hidden since the Foundation of the World, René Girard’s mimetic theory is presented as elucidating “the origins of culture.” He posits that archaic religion (or “the sacred”), particularly in its dynamics of sacrifice and ritual, is a neglected and major key to unlocking the enigma of “how we became human.” French philosopher of science Michel Serres states that Girard’s theory provides a Darwinian theory of culture because it “proposes a dynamic, shows an evolution and gives a universal explanation.” This major claim has, however, remained underscrutinized by scholars working on Girard’s theory, and it is mostly overlooked within the natural and social sciences. Joining disciplinary worlds, this book aims to explore this ambitious claim, invoking viewpoints as diverse as evolutionary culture theory, cultural anthropology, archaeology, cognitive psychology, ethology, and philosophy. The contributors provide major evidence in favor of Girard’s hypothesis. Equally, Girard’s theory is presented as having the potential to become for the human and social sciences something akin to the integrating framework that present-day biological science owes to Darwin—something compatible with it and complementary to it in accounting for the still remarkably little understood phenomenon of human emergence.

Pierpaolo Antonello is Reader in Modern Italian Literature and Culture at the University of Cambridge and Fellow of St. John’s College. With René Girard and João Cezar de Castro Rocha, he coauthored Evolution and Conversion: Dialogues on the Origins of Culture, and he is a member of the Research and Publications committees of Imitatio.
Paul Gifford is Buchanan Professor of French Emeritus at the University of St Andrews, where he also was Departmental Chair for seven years and directed the Institute of European Cultural Identity Studies for ten years. He is one of the very few non-French academics to hold the most prestigious of France’s many doctorates, the Doctorat d’ État ès Lettres.

Most of the time, the promise of interdisciplinary inquiry remains precisely that—a promise. This collection, however, makes good on such a promise in the most decisive fashion. Here we have a highly esteemed collection of scholars brought together to discuss issues of the first importance—both to the sciences and the humanities. The description "indispensable" rarely applies to collections; in the case here, the label is unavoidable. This is, in short, an outstanding work of interdisciplinary scholarship.
—Chris Fleming, Senior Lecturer, School of Humanities and Communication Arts, University of Western Sydney