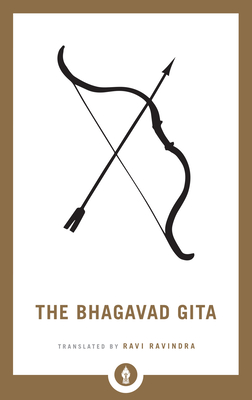 A new translation of the great spiritual classic.

Widely hailed as the single most important text to emerge from India, the Bhagavad Gita has inspired countless readers—sages, students, yogis, and seekers. A part of the great Hindu classic, the Mahābhārata, this text is presented as a dialogue between the skillful warrior Arjuna and the god Krishna, as Arjuna faces a crisis about dharma and prepares for a great battle with no defenses other than Krishna’s divine guidance.
Dr. Ravindra’s fresh prose translation stands out from the many other versions by presenting the Bhagavad Gita as a call to action. It is at heart a universal guide to navigating the battle of life required of each and every one of us.

The Bhagavad Gita: A Guide to Navigating the Battle of Life, from which this book derives, contains commentary from the translator, along with a selected bibliography and index.

This book is part of the Shambhala Pocket Library series.

The Shambhala Pocket Library is a collection of short, portable teachings from notable figures across religious traditions and classic texts. The covers in this series are rendered by Colorado artist Robert Spellman. The books in this collection distill the wisdom and heart of the work Shambhala Publications has published over 50 years into a compact format that is collectible, reader-friendly, and applicable to everyday life.

RAVI RAVINDRA, PhD, is an international speaker and the author of books on religion, science, and spirituality. A Canadian of Indian birth, he is Professor Emeritus at Dalhousie University in Halifax, where he served for many years as a professor in comparative religion, philosophy, and physics. His spiritual search has immersed him in the teachings of Yoga, Gurdjieff, Krishnamurti, and Christianity, as well as interreligious dialogue and the relationship between science and spirituality. He is the author of numerous books, notably his translation Patañjali's Yoga Sutras with commentary, his writings on Krishnamurti and the Gurdjieff Work, and his comparisons of Indian and Christian mysticism.

“A commentary on the Bhagavad Gita that is in a class of its own. The background story from the Mahabharata and its characters come alive.  Almost no commentary on this ancient scripture emphasizes an historical battle but rather, all take pains to point to it as a metaphor for the battle within.  However none so superbly take us within, to the very place of the battle raging within each one of us, as Ravi Ravindra's does. In so doing he truly makes come alive the promise of Krishna in Chapter Six that, ‘Yoga is breaking the bond with suffering.”—Swami Ambikananda Saraswati, Author, Founder of Traditional Yoga Association, UK

"This engaging new rendition of one of the world's most venerated works opens up many of its dimensions that have usually been hidden. Ravindra's version brought me closer to the actual experience behind the meaning of the text than any other translations that I've read."—Richard Smoley, author of The Dice Game of Shiva: How Consciousness Creates the Universe.

“Ravi Ravindra’s translation of the Bhagavad Gita allows these sacred teachings to penetrate our hearts, open our minds and call us to action. His commentary on this classic text of yoga invites a sincere and practical engagement with the text and raises many questions for our lives. Ravindra’s intimacy with the spiritual traditions of both the east and the west brings a rich and fertile look into the meaning of these teachings.”—Kira Sloane, Director of Yoga Anytime

“Ravindra’s book speaks so splendidly (yes, with a radiant splendor) to the heart-mind of the student: he has surely listened so well to Krishna that the words fairly sing (after all, it is a “song”) in one’s being, touching both heart and mind!  I particularly appreciated too the several footnotes that opened up the fullness of meaning of so many of the Sanskrit words in the original text.  It is a work to be lived with, to be turned to again and again, as it speaks to the core of one’s being.”—Joy Mills, Former President of the Theosophical Society in America and Australia.