Femininity and Authorship in the Novels of Elizabeth von Arnim: At Her Most Radiant Moment (Hardcover) 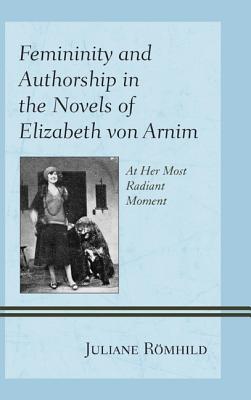 By Juliane Römhild
Email or call for price.

When Elizabeth von Arnim anonymously published her debut Elizabeth and Her German Garden (1898), she became a literary star overnight. The mystery surrounding the identity of this witty aristocratic diarist in her romantic garden kept readers guessing: Who was Elizabeth? A Prussian Princess? The daughter of Queen Victoria? Throughout her long and successful career as one of England's best satirical novelists, von Arnim never officially revealed her identity. Instead, to her readers and friends she simply became known as "Elizabeth." From her first book to her capricious autobiography All the Dogs of My Life (1936), throughout her career von Arnim would explore questions of identity and self-representation. And in spite of von Arnim's love of masquerades and guises, her books include funny and surprisingly personal meditations on the challenges of being a woman writer wrestling with a masculine literary tradition, of taking pride in one's commercial success while moving in Modernist circles, and of being both a hard-working professional and an elegant hostess. In tracing the conflict between femininity and authorship in von Arnim's works, this book engages with key literary issues of the time. Von Arnim's early books offer a witty critique of New Woman fiction. Von Arnim's self-positioning on the literary market and her relationships with writers like Katherine Mansfield, Henry James, and Virginia Woolf shed light on the connections between middlebrow and modernist literature. Von Arnim's complex autobiography, finally, gives a tentative answer to the all-important question: can a writing woman be a lady?