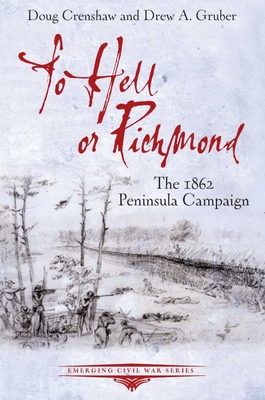 In the spring of 1862, George McClellan and his massive army were slowly making their way up the Virginia Peninsula. Their goal: capture the Confederate capital and end the rebellion. "To Hell or Richmond" one Federal artillery unit vowed, sewing the words onto their flag.

The outnumbered and outgunned Confederates under generals "Prince John" Magruder and Joseph E. Johnston kept pulling back, drawing McClellan away from his base at Fort Monroe and further up the peninsula--exactly the direction McClellan wanted to go. But if they could draw him just far enough, and out of position, maybe they could attack and defeat him.

As McClellan approached the very gates of Richmond, a great battle was brewing. Could the Confederates save their capital and, with it, their young nation? Could the Federals win the war with a single fatal blow?

In To Hell or Richmond: The 1862 Peninsula Campaign, Doug Crenshaw and Drew Gruber follow the armies on their trek up the peninsula. The stakes grew enormous, surprises awaited, and the soldiers themselves had only two possible destinations in mind.