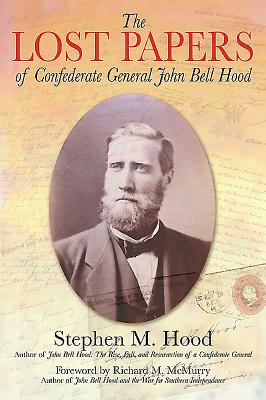 Scholars hail Confederate General John Bell Hood's personal papers as "the most important discovery in Civil War scholarship in the last half century." This invaluable cache includes documents relating to Hood's U.S. Army service, Civil War career, and postwar life. It includes letters from Confederate and Union officers, unpublished battle reports, detailed medical reports relating to Hood's two major wounds, and dozens of letters exchanged between Hood and his wife Anna. This treasure trove is being made available for the first time for both professional and amateur Civil War historians in The Lost Papers of Confederate General John Bell Hood, edited and annotated by award-winning author Stephen M. Hood. The historical community long believed General Hood's papers were lost or destroyed, and numerous books and articles were written about him without the benefit of these invaluable documents. In fact, the papers had been carefully preserved for generations by Hood's descendants. In 2012, collateral descendent Stephen Hood was given access to these papers as part of his research for his book John Bell Hood: The Rise, Fall, and Resurrection of a Confederate General (Savas Beatie, 2013). This 200+ document collection sheds important light on some of the war's lingering mysteries and controversies. For example, letters from Confederate officers help explain Hood's failure to entrap Schofield's Union army at Spring Hill, Tennessee, on November 29, 1864. Another letter by Lt. Gen. Stephen D. Lee helps to explain Maj. Gen. Patrick Cleburne's gallant but reckless conduct that resulted in his death at Franklin. Lee also lodges serious allegations against Confederate Maj. Gen. William Bate's troops. Other papers explain, for the first time, the purpose and intent behind Hood's "controversial" memoir Advance and Retreat, and validate its contents. While these and others offer a military perspective of Hood the general, the revealing letters between he and Anna, his beloved and devoted wife, help us better understand Hood the man and husband. Historians and other writers have spent generations speculating about Hood's motives, beliefs, actions, and objectives and the result has not always been flattering or even fully honest. Now, long-believed "lost" firsthand accounts previously unavailable offer insights into the character, personality, and military operations of John Bell Hood the general, husband, and father.