A River Runs Again: India's Natural World in Crisis, from the Barren Cliffs of Rajasthan to the Farmlands of Karnataka (Hardcover) 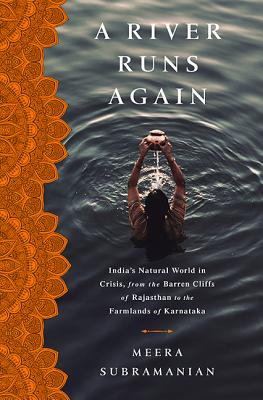 Crowded, hot, subject to violent swings in climate, with a government unable or unwilling to face the most vital challenges, the rich and poor increasingly living in worlds apart; for most of the world, this picture is of a possible future. For India, it is the very real present.

In this lyrical exploration of life, loss, and survival, Meera Subramanian travels in search of the ordinary people and microenterprises determined to revive India's ravaged natural world: an engineer-turned-farmer brings organic food to Indian plates; villagers resuscitate a river run dry; cook stove designers persist on the quest for a smokeless fire; biologists bring vultures back from the brink of extinction; and in Bihar, one of India's most impoverished states, a bold young woman teaches adolescents the fundamentals of sexual health. While investigating these five environmental challenges, Subramanian discovers the stories that renew hope for a nation with the potential to lead India and the planet into a sustainable and prosperous future.

Meera Subramanian is an award-winning journalist whose work has been published in New York Times, Nature, Virginia Quarterly Review, Orion, and elsewhere. She is an editor for Killing the Buddha and earned her graduate degree in journalism from New York University. Subramanian received a Fulbright-Nehru Senior Research Fellowship for her work on A River Runs Again. She lives on Cape Cod in Massachusetts and can be found at meerasub.org and @meeratweets.

“An elegiac account of India's struggles to cope with, or even reverse, the devastating effects of too many people living on too little land in a country where the poor still far outnumber the rich… The problems are overwhelming and intransigent, but the human spirit shines through in attempts to set right the ways of heedless modernization. This is a book filled with small acts of bravery, and Subramanian wishes us to believe that they may, in the aggregate, turn the tide of decades of false promises of sustainability and growth.” —Sheila Jasanoff, Current History

“Exemplary...Subramanian's writing is thoughtful and often lyrical as she balances current science with narrative journalism from her travels, switching modes to great effect. While reporting on environmental issues can sometimes overwhelm or burden the reader with guilt, Subramanian thwarts this risk by providing refreshing glimpses of individuals and organizations working against the problems India faces. Her work is engaging, informative, and eminently readable.” —Publishers Weekly, starred review

“This is a necessary book. And Meera Subramanian is the perfect person to be writing it.” —Suketu Mehta, author of Maximum City: Bombay Lost and Found

“A River Runs Again is at once sweeping and intimate—a smart, informative, richly reported book full of memorable characters.” —Elizabeth Kolbert, author of The Sixth Extinction: An Unnatural History

“Meera Subramanian has written an eye-opening and even inspiring book about a country that is so often terribly misunderstood by the West. Her serious but never morose storytelling introduces us to an India that is neither basket case nor Shangri-La, but a diverse land full of ordinary people questing for an extraordinary goal: a happier, greener future for 1.2 billion of their fellow citizens, and for the rest of us, too. We should all be rooting them on.” —Dan Fagin, Pulitzer Prize–winning author of Toms River: A Story of Science and Salvation

“[Meera Subramanian's] style (she has one) is cool, precise, understated and almost lyrical, in the tradition of the best literary / scientific journalists.” —Richard Doughty, editor of Saudi Aramco World

“This is investigative journalism as story: fact-filled but optimistic, rueful and inviting. The author writes with warm intelligence, and she challenges readers.… In each chapter, as well, Subramanian offers specific antidotes as anecdotes, narrating in a measured, conversational, welcoming voice… Each of the stories is comprehensive while nimble, as well as provocative. Promising prescriptions to five of India's baneful environmental cases—right thinking and accusatory in all the right places.” —Kirkus Reviews

“The result of her immersion in the efforts of so many dedicated individuals is a hopeful narrative about good people doing hard work to improve the lives of others. Subramanian's strong journalist ethic shines through in the penetrating questions she poses and the baleful eye she casts on those who would shrug off her perceptive observations about the clash between traditional practices and modern life. A significant and valuable inquiry into twenty-first-century India.” —Booklist

“By embedding numerous facts and data about India's inhabitants into her engrossing narrative, Subramanian has created a work that belongs in all environmental collections.” —Library Journal

"Subramanian's writing brings a positive approach to India's problems...Throughout this book, Subramanian takes us on a true journey of learning and she does it in a quiet, thorough, and knowledgeable manner. She educates us on the evolution of the problem and finally, through small narratives of those she met along the way—everyday farmers, wives, volunteer workers, and government employees, we learn of how they have embraced the progressive ideas as ways to save India's ecology." —New York Journal of Books

“A sweeping story of loss and the fight for restoration — both maddening and hopeful, as many environmental stories are.” —Eugene Weekly

“It could be depressing to read about seemingly intractable problems, but Subramanian showcases positive efforts at mitigating these problems and passions of people seeking to make India into a better place for all.” —Saathee Magazine

“What happens in India may turn out—even more than China—to be the key to the kind of environmental future the planet faces. Very few people are qualified to tell the story with as much clarity, compassion, and character-driven power as Meera Subramanian.” —Bill McKibben, author of Oil and Honey: The Education of an Unlikely Activist

“Although its narrative is lyrical and heartfelt, the book is also an ode to science—good science that respects natural processes rather than seeking to subjugate them…Subramanian, whose fluid writing has appeared in everything from the journal Nature to The Wall Street Journal, shows a rare gift in her ability to combine personal but uncontrived field reporting with the cultural sensitivity of a returning daughter of India and the critical faculties of someone confident in the science.” —New Scientist

"Meera Subramanian's A River Runs Again tells five tales of India at the crossroads – a filigree of cautionary and celebratory stories – voiced with dignified passion...Subramanian navigates these rough waters between baneful emergencies and precarious signs of enlightened attitudes with the right degree of cautious optimism." —Christian Science Monitor