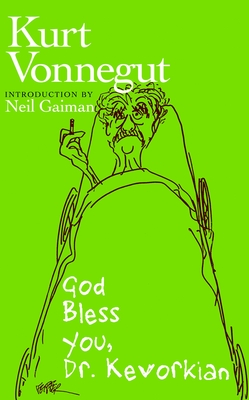 From Slapstick's "Turkey Farm" to Slaughterhouse-Five's eternity in a Tralfamadorean zoo cage with Montana Wildhack, the question of the afterlife never left Kurt Vonnegut's mind. In God Bless You, Dr. Kevorkian, Vonnegut skips back and forth between life and the Afterlife as if the difference between them were rather slight. In thirty odd "interviews," Vonnegut trips down "the blue tunnel to the pearly gates" in the guise of a roving reporter for public radio, conducting interviews: with Salvatore Biagini, a retired construction worker who died of a heart attack while rescuing his schnauzer from a pit bull, with John Brown, still smoldering 140 years after his death by hanging, with William Shakespeare, who rubs Vonnegut the wrong way, and with socialist and labor leader Eugene Victor Debs, one of Vonnegut's personal heroes.
What began as a series of ninety-second radio interludes for WNYC, New York City's public radio station, evolved into this provocative collection of musings about who and what we live for, and how much it all matters in the end. From the original portrait by his friend Jules Feiffer that graces the cover, to a final entry from Kilgore Trout, God Bless You, Dr. Kevorkian remains a joy.

Born in 1922 in Indianapolis, Indiana, KURT VONNEGUT was one of the few grandmasters of modern American letters. Called by the New York Times “the counterculture’s novelist,” his works guided a generation through the miasma of war and greed that was life in the U.S. in second half of the 20th century. After a stints as a soldier, anthropology PhD candidate, technical writer for General Electric, and salesman at a Saab dealership, Vonnegut rose to prominence with the publication of Cat’s Cradle in 1963. Several modern classics, including Slaughterhouse-Five, soon followed. Never quite embraced by the stodgier arbiters of literary taste, Vonnegut was nonetheless beloved by millions of readers throughout the world. “Given who and what I am,” he once said, “it has been presumptuous of me to write so well.” Kurt Vonnegut died in New York in 2007.

“A smattering of wit, a splattering of satire, and a plop of colorful commentary. Not to mention Vonnegut’s signature steely irony.” —Providence Sunday Journal

“[A] delightful fictional foray in which Vonnegut, courtesy of Dr. Death, toggles back and forth between life and afterlife, meditating on death by way of very short ‘interviews’ with the likes of Newton, Shakespeare, and a penitent Hitler.” —Globe and Mail