Girls Are Not Chicks Coloring Book (Reach and Teach) (Paperback) 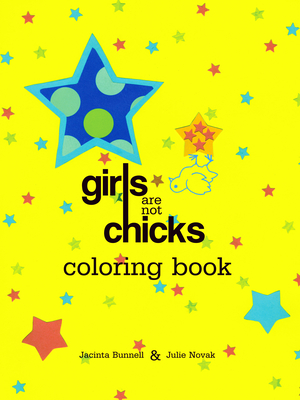 By Jacinta Bunnell, Julie Novak
$10.00
On Our Shelves Now

Truly fun for all ages, this unique coloring book subversively and playfully examines the female gender stereotypes that pervade daily life. A diverse group of pictures reinforce positive gender roles throughout the book and show that girls are thinkers, creators, fighters, and healers. Some of the characters who show the new face of the feminine include Rapunzel, who now has power tools and Miss Muffet, who tells the spider off and considers a career as an arachnologist. Deconstructing the homogeneity of gender expression has never been so colorful.

Jacinta Bunnell is an artist and writer who promotes a gender-defiant new world. Julie Novak is the art director for New York House magazine, an actor, a writer, a musician, and an artist. They both live in New York's Hudson Valley.

"Get this cool feminist coloring book even if you don't have a kid."  —Jane Pratt, founding editor, Jane and Sassy magazines

"Some of the pictures and captions in this colouring book are funny. A woman riding a tractor: Who says girls don't like to play in the dirt? Two ballerinas dancing: No one wants to fight the patriarchy alone. Make friends."  —Guardian