Grave Expectations: Planning the End Like There's No Tomorrow (Paperback) 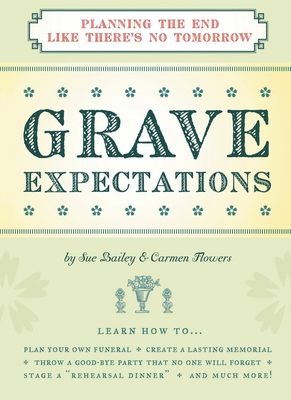 Have you ever been at a funeral, turned to the person sitting with you and said, "I never want you to do this to me. When the time comes, remember I'd like ..." Well, this is a book to collect those thoughts so you can put them down and forget about them -- knowing they are expressed for the right people to see and act on at the appropriate time.

Everybody's going to die. Nobody gets out alive. Death is the one thing you can absolutely count on. Why then are people so reluctant to plan for it?

Full of humorous and poignant funeral stories and first-person accounts, Grave Expectations - Planning "The End" Like There's No Tomorrow, like the perennially popular wedding planners that line the shelves of every bookstore, is the ultimate handbook, packed with creative suggestions for realizing one's final wishes. This is a book that gives people permission to memorialize their lives on their own terms and in their own ways. This is a lively book about preparing for death; it's not a book to be afraid of. Who knew arranging a funeral could be fun?

Sue Bailey is the Vice President of On-Air promotion for HBO Original Programming. She oversees promotion for HBO original series such as The Sopranos, Six Feet Under, Curb Your Enthusiasm, Entourage, Deadwood and Rome, as well as HBO films including, Angels in America, Peter Sellers, Band of Brothers and Empire Falls. As a producer and as a creative director/executive producer, Sue has been the recipient of over one hundred national and international broadcast and design awards—New York Film and Television Festivals, Promax—Gold, Silver Bronze.

Carmen Flowers has worked for The SONY Corporation, during which time she appeared on over two hundred news and talk shows around the country including Regis & Kathy Lee, Hour Magazine with Gary Collins and CNN. Carmen is credited with coining the words “camcorder” and “walkman.”

She was the co-anchor of World Travel News on the Travel Channel as well as narrator of the program The Perfect Trip with Matt Lauer which led to her own syndicated talk show Weight Loss Today. Carmen moved behind the camera when she founded Liebert Recording Studios in New York, where she worked as executive producer of commercial and independent features before forming her current media content development company, Little Black Dog, Inc.

"Having difficulty mustering a celebratory mood in advance of what looks to be the grimmest of New Years? Why not just bury yourself in arrangements for the one event where all and sundry will be (you hope) truly bummed out -- your funeral. Who knows, you might even enjoy yourself. Especially if you consult Grave Expectations: Planning the End Like There's No Tomorrow,... Interspersed with practical if often wildly opinionated advice...and funereal factoids... this fill-in-the-blanks, do-it-yourself handbook will allow you to, as the chapter called "The Visitation/Viewing" has it, 'wake up to the possibilities.'" -- Alida Becker, New York Times blog "Paper Cuts"

"Few of us can face the idea of planning our own funerals - but authors Carmen Flowers and Sue Bailey argue we all should, and have fun while we're at it! In their book Grave Expectations, they spell out how to address 'death's pesky details' and ensure that your funeral really is about YOU. You won't be there, so you've got to do some things in advance, if you want to have a say." -- AARP Primetime Radio