Time: Visions of the '60s: The Images That Define the Decade (Hardcover) 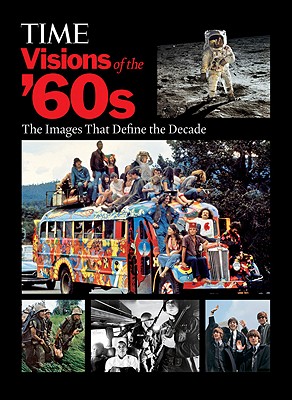 By Kelly Knauer (Editor), Ellen Fanning (Designed by)
$29.95
Email or call for price.

Forty years after they ended, the 1960s continue to fascinate us.
The decade was a pivot point of the 20th century, a watershed period when society, politics and culture underwent a series of shattering changes. Abroad, it was an era bristling with confrontation and crisis, from cold war showdowns in Berlin and Cuba to a long, ugly war in Vietnam. At home, it was a time of social upheaval, as a new generation of idealistic youngsters challenged the values of their elders. Now Time captures the 1960s in all their swirling glory and lingering heartache in an expansive gallery of the photographs that define the decade. Here are the great faces: the Rev. Martin Luther King Jr. and Che Guevara; Arnold Palmer and Twiggy; Muhammad Ali and Andy Warhol. Here are the great events, from the historic landing on the moon to the high times of Woodstock to the assassinations of three inspiring young American leaders. Here are the pulsating currents that drove social change, from the streets of Birmingham, Ala., to Washington's National Mall, from London's Carnaby Street to the Fillmore Auditorium in San Francisco. Yes, the times, they were a-changin'. And, fortunately, photographers were a shootin'. The result is a close encounter with a world that has vanished, but which roars back into vivid life in this fascinating, indispensable volume. Turn the pages and tune in to the highs and lows of one of the most exciting periods in American history: the '60s.

Kelly Knauer is a writer and editor for TIME Books in New York City, the book-publishing division of TIME Magazine. He has written and edited more than 30 TIME books on such subjects as Hurricane Katrina, the Middle East, great photojournalism, natural history, global warming, architecture, American history, and the life of Abraham Lincoln. He worked with TIME's longtime White House Correspondent, Hugh Sidey, on the book Hugh Sidey's Portraits of the Presidents. Among those who have written introductions for Mr. Knauer's books are former Presidents George H.W. Bush and Jimmy Carter and actor Tom Hanks.