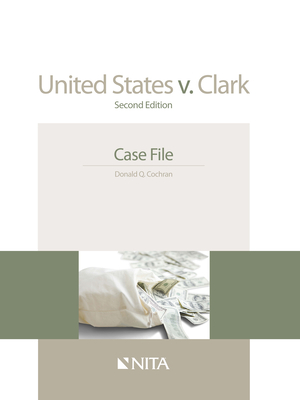 By Donald Q. Cochran
Email or call for price.
Usually Arrives in 2-10 Days

In United States v. Clark, Andre Clark has been charged with bank robbery after the Main Street Bank in Nita City was robbed by three unknown individuals. An unidentified caller reported to 911 that he saw the three individuals run from the bank and followed them. He reported that they switched cars and then stopped at a house. Based on this call, Nita Bureau of Investigation agents went to the house, searched it, and found a handgun, $12,000, and a mask. The three men at the residence, including Andre Clark, William Cole, and Jason Fleming were arrested and indicted. Cole has pled guilty and Fleming with be tried at a later time. There are three witnesses for the State and two for the defendant. There is a DNA expert that may be called by either party.