The Decline of American Liberalism (Paperback) 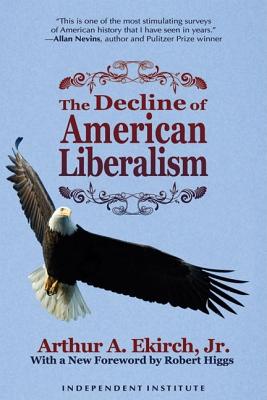 By Jr. Ekirch, Arthur A.
Email or call for price.
Special Order

From the Revolutionary War and World Wars I and II to the Great Depression and civil rights battles, this chronicle takes a historical look at how principles such as individual liberty and democratic rule have weathered the last few centuries. The growth of state empowerment and its effect on autonomy and the economy is also discussed.

Arthur A. Ekirch Jr. was a leading scholar of American intellectual history and a professor emeritus of history at the State University of New York–Albany. He is the author of numerous books, including The American Democratic Tradition, The Civilian and the Military, and Man and Nature in America.

“Ekirch argues in The Decline of American Liberalism that the main trend since the American Revolution has been to augment concentration of economic and state power and thus whittle away individual freedom. Mr. Ekirch admits that the decline of the liberal tradition has been paralleled by the advance of other philosophies and values—but his sustained argument pulls few punches in its well-written, hard-hitting pages. Professor Ekirch has written an intelligent and important book. That such a book could be written and published proves that liberalism in America can still be thoughtfully interpreted and eloquently championed.” —Merle E. Curti, the New York Times

“Taking as his standpoint the classical conception of liberalism as an attitude and including belief in limited representative government and economic freedom for the individual, Arthur Ekirch traces its decline from the beginning of our national history. . . . Professor Ekirch has contributed a stimulating interpretation and survey of American development. His chapters on the growth of the garrison state and the cult of national loyalty are a devastating commentary which has the virtue of relating these development to long term trends in this society.” —The Nation

“ . . . Mr. Ekirch has read widely and deeply in the history of the United States. America, in Mr. Ekirch’s view, began in the ‘liberal’ tradition of western civilization. This liberalism was in part a doctrine—the freedom of the individual. But in addition to being a doctrine it was a habit of mind, a tendency toward the reasonable, the tolerant, and the moderate. Since the American Revolution the story of the United States has been one of the steady decline of this liberalism. In recent times the welfare state and the military state have pushed political, economic, and ideological centralization to a point where ‘all the major values of the American liberal tradition’ are gravely menaced. . . . Mr. Ekirch systemically applies his thesis to each period in American history. . . .” —Saturday Review

“The New Deal and its successors substituted the ideals of security and equality for freedom and diversity. It is a formidable indictment, and Mr. Ekirch marshals a large body of evidence for it—enough to make his book stimulating and rewarding reading.” —The Economist

“To most people the term ‘liberalism’ is confusing. Some people equate it with the New Deal, others with any kind of leftist philosophy. In this powerful and brilliant book, Arthur Ekirch uses the term in the only way it can be properly used—in its historical and classical sense—not as a program, nor even as a well-defined system, but more as an attitude of mind. . . . Everyone who respects the worth and dignity of individual human beings and dislikes totalitarianism can read this distinguished book with profit.” —Dumas Malone, the History Book Club Review

“The Decline of American Liberalism is an extremely interesting, thoughtful, and valuable book. It is one of the most stimulating surveys of American history that I have seen in years.” —Allan Nevins, Harmsworth Professor of American History, Oxford University

"Arthur Ekirch’s The Decline of American Liberalism is gloomier about liberalism and more loyal to the original (i.e. libertarian) understanding of it. Rather than celebrate the rise of reform, he laments its contribution to the decline of individualism. —Jonah Goldberg, editor at large, National Review Online

“Libertarian-ish Rand Paul is officially running for president. For those looking to understand libertarianism, or how it influences Paul, this book is a good place to start. . . . Originally published in 1955 with the Cold War at a full simmer, The Decline of American Liberalism offers up a unique reading of American history from the colonial period on as a struggle between forces of centralization and decentralization. A historian of militarism, Ekirch feared that in our quest to defeat the Soviet Union, we had ironically ended up valorizing the collective at the expense of the individual, ushering in an age of conformity in politics, culture, and commerce. ‘Liberal values associated with the eighteenth-century Enlightenment—and especially that of individual freedom,’ wrote Ekirch in the year when The Man in the Grey Flannel Suit was published, ‘have slowly lost their primary importance in American life and thought.’ Big government, big business, big labor—all these things were more closely interrelated than anyone wanted to acknowledge, argued Ekirch. Ekirch’s titular liberalism refers to the 19th-century variety of the term, which is far closer to contemporary libertarianism than, say, Ted Kennedy’s policy agenda. A critic of the draft and economic planning—as well as of McCarthyism—Ekirch worried that living in a ‘garrison state’ that is forever on war footing inevitably limited all sorts of social and economic freedoms while granting the government more and more power to surveil and regulate citizens. Today’s great patriotic war, of course, is being fought not against international communism but Islamic terrorism. But to the extent that the war on terrorism is underwriting massive intervention abroad and at home, The Decline of American Liberalism is an essential guide to the connection between civil liberties and economic ones that libertarians take for granted but often seem puzzling to conventional conservatives and liberals.” —The Daily Beast

“With its brilliant emphasis on ongoing, never-ending battles between forces of centralization and decentralization since our colonial days, The Decline of American Liberalism provides the key to fully understanding not only our country’s past but its present and future too.” —Nick Gillespie, editor, Reason Online and Reason TV