Pull Up a Chair: The Vin Scully Story (Paperback) 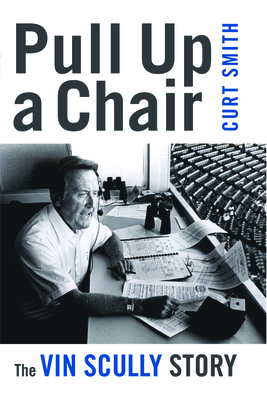 In 1950, Vin Scully broadcast his first major league baseball game for the then–Brooklyn Dodgers. Nearly sixty years later he still invites a listener to “pull up a chair,” completing a record fifty-ninth consecutive year of play-by-play. Recruited and mentored by the legendary Red Barber, the New York–born Scully moved with the Dodgers to Los Angeles in early 1958. His instantly recognizable voice has described players from Duke Snider to Orel Hershiser to Manny Ramirez, with hundreds in between.At one time or another, Scully has aired NBC Television’s Game of the Week, twelve All-Star Games, eighteen no-hitters, twenty-five World Series, and network football, golf, and tennis. He has made every sportscasting Hall of Fame; received a Lifetime Emmy Achievement award and a Star on the Hollywood Walk of Fame; and been voted “most memorable [L.A. Dodgers] franchise personality.” In 2000, the American Sportscasters Association named Scully the Sportscaster of the 20th Century.The first biography of Vin Scully is long overdue. Curt Smith—to USA Today, “The voice of authority on baseball broadcasting”—is the ideal man to write it. Scully opens each broadcast by wishing listeners, “A very pleasant good afternoon.” Pull Up a Chair will provide a reader with the same.

Curt Smith is the author of seventeen books, including the classic history of baseball broadcasting, Voices of The Game. His other books include: Pull Up a Chair: The Vin Scully Story (Potomac Books, 2009), Mercy! A Celebration of Fenway Park’s Centennial (Potomac Books, 2012), and most recently, George H. W. Bush: Character at the Core (Potomac Books, 2014). Smith is a senior lecturer of English at the University of Rochester, a Gate House Media columnist, and a contributor to publications from Newsweek to the New York Times. The host of the “Voices of The Game” series at the Smithsonian Institution and the National Baseball Hall of Fame and Museum, he has been named to the Judson Welliver Society of former presidential speechwriters.

"I highly recommend it. . . . His life story has been beautifully sculpted by Curt Smith in Pull Up a Chair. It makes for great summer reading."—politicalmavens.com

“Smith…makes the perfect Scully biographer. . . . Longtime baseball fans will savor this one as they would a fine brandy. . . . Baseball used to bring out the best in those who wrote and spoke about it; Scully and Smith remind us that, in some cases, it still does.”—Booklist

"A great new book . . . about the life and times of Dodgers announcer Vin Scully. Author Curt Smith captures . . . the great things about this very popular man and why he has lasted so long in one job, which is basically unheard of in the media world.”—San Francisco Examiner

"[A] wonderful tribute. . . . Pull Up a Chair is a wonderful read and a fitting tribute to an 81-year-old broadcaster who hasn't lost anything off his fastball."—scottpitoniak.blogspot.com

"Smith has as much a mastery of the English language as Scully."—DemocratChronicle.com

"No one can truly capture Scully's use of English and sense of history in a book. Smith does as well as possible by not only telling the Scully story, but also spicing the narrative with play-by-play script."—USA Today