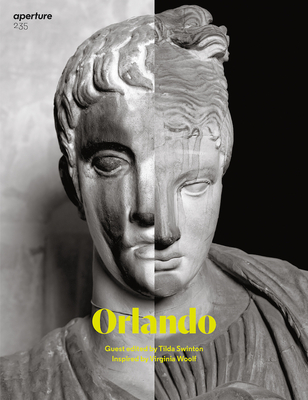 This is book number 235 in the Aperture Magazine series.

For the summer 2019 issue of Aperture, Swinton, as guest-editor, draws upon the central themes of Orlando--gender fluidity, consciousness without limits, and the deep perspective of a long life--to offer a collection of images and writings that celebrate openness, curiosity, and human possibility.

Virginia Woolf's prescient 1928 novel Orlando tells the story of a young nobleman who, during the era of Queen Elizabeth I, lives for three centuries without aging and mysteriously shifts gender along the way. In 1992, filmmaker Sally Potter released a now-classic adaptation of the book with Tilda Swinton in the starring role as Orlando. Since then, Woolf's tale has continued to hold sway over Swinton, who describes the book's ability "to change like a magic mirror. Where I once assumed it was a book about eternal youth, I now see it as a book about growing up, about learning to live."

"Woolf wrote Orlando," Swinton notes, "in an attitude of celebration of the oscillating nature of existence. She believed the creative mind to be androgynous. I have come to see Orlando far less as being about gender than about the flexibility of the fully awake and sensate spirit. This issue of Aperture will be a salute to indetermination and limitlessness, and a heartfelt celebration of the fully inclusive and expansive vision of life exemplified by the extraordinary artists collected here. This issue features contributions by artists and writers, including Michael Cunningham, Zackary Drucker, Lynn Hershman Leeson, Isaac Julien, Eileen Myles, Maggie Nelson, Jamal Nxedlana, Elle P rez, Sally Potter, Walter Pfeiffer, R. Ruby Rich, Antwaun Sargent, Viviane Sassen, Collier Schorr, Paul Mpagi Sepuya, Mickalene Thomas, Lynne Tillman, Justin Torres, Marina Warner, Carmen Winant, and more.