Cro-Magnon: How the Ice Age Gave Birth to the First Modern Humans (Hardcover) 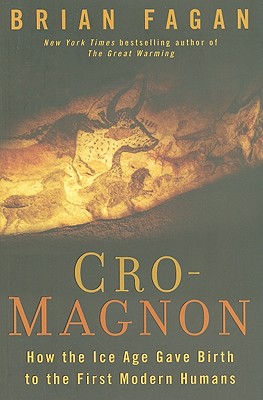 Cro-Magnons were the first fully modern Europeans?not only the creators of the stunning cave paintings at Lascaux and elsewhere, but the most adaptable and technologically inventive people that had yet lived on earth. The prolonged encounter between the Cro-Magnons and the archaic Neanderthals and between 45,000 and 30,000 years ago was one of the defining moments of history. The Neanderthals survived for some 15,000 years in the face of the newcomers, but were finally pushed aside by the Cro-Magnons' vastly superior intellectual abilities and cutting-edge technologies, which allowed them to thrive in the intensely challenging climate of the Ice Age.
What do we know about this remarkable takeover? Who were the first modern Europeans and what were they like? How did they manage to thrive in such an extreme environment? And what legacy did they leave behind them after the cold millennia? The age of the Cro-Magnons lasted some 30,000 years?longer than all of recorded history. Cro-Magnon is the story of a little known, yet seminal, chapter of human experience.

Brian Fagan was born in England and spent several years doing fieldwork in Africa. He is Emeritus Professor of Anthropology at the University of California, Santa Barbara. He is the author of "New York Times "bestseller "The Great Warming" and many other books, including" Fish on Friday: Feasting, Fasting, and the Discovery of the New World, " and several books on climate history, including "The Little Ice Age" and "The Long Summer."

“[A] fascinating account…Fagan’s narratives of cave-painting and hunting – among other anecdotes – really bring this history-laden book to life.”—Green Life blog, Sierra Magazine

"Archaeology contributing editor Brian Fagan provides readers with intimate accounts of what he imagines Ice Age life was like for both the vanishing Neanderthals and the invading Homo sapiens who developed the basis of modern culture. He lauds the ‘endless ingenuity and adaptability’ of ordinary men and women living in bitterly cold Paleolithic Europe. ‘My DNA tells me that, genetically, I’m one of them,’ Fagan concludes, ‘and I’m proud of it.’”—Archaeology (Editors’ Pick)

“Fagan provides readers with a fascinating discussion of the lifestyle of Neanderthals and early modern humans… In bringing these ancient human societies to life, Fagan combines an engaging narrative style with a well-written and easily understood scholarly discussion…an excellent resource.”—National Speleological Society newsletter

“Highly entertaining and instructive…[Fagan] does an admirable job in bringing vividly to life the Europe of between eighty and ten thousand years ago… Fagan's book has been overtaken by the onward progress of his science—this happens to lots of such books—and there are aspects of his case that invite debate. But it is an admirable book nevertheless; the re-imagining of the past is entertainingly done, and a great deal of science, especially climate science, is accessibly introduced on the way.” – Barnes & Noble Review