The Complete Life of Krishna: Based on the Earliest Oral Traditions and the Sacred Scriptures (Paperback) 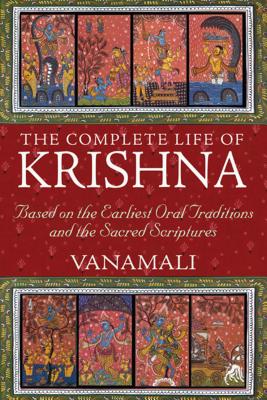 The first book to cover Krishna’s entire life, from his childhood pranks to his final powerful acts in the Mahabharata war

• Shows how the stories of Krishna’s life are expressed with such simplicity and humor that they enable anyone--man, woman, or child--to see the wisdom of his teachings

Krishna, one of the most beloved characters of the Hindu pantheon, has been portrayed in many lights: a god-child, a prankster, a model lover, a divine hero, an exemplary ruler, and the Supreme Being. In The Complete Life of Krishna, Vanamali, a leading Krishna expert from a long line of prominent Krishna devotees, provides the first book in English or Sanskrit to cover the complete range of the avatar’s life.

Drawing from the Bhagavad Purana, the Bhagavad Gita, the Mahabharata, and India’s sacred oral tradition, Vanamali shares stories from Krishna’s birth in a dungeon and early days as a merry trickster in Vrindavana, through his time as divine ruler at Dwaraka, to his final powerful acts as the hero Arjuna’s charioteer and guru in the Kurukshetra war. She explains how Krishna became a mahayogi, the greatest of all yogis, and attained complete mastery over himself and nature. By integrating the hero-child with the mahayogi, the playful lover with the divine ruler, Vanamali shows how the stories of Krishna’s life are expressed with such simplicity and humor that they enable anyone--man, woman, or child--to see the wisdom of his teachings.

This complete biography of the man who was also a god provides a valuable meditative tool allowing Krishna’s lessons to illuminate from within.

Mataji Devi Vanamali has written seven books on the gods of the Hindu pantheon, including Hanuman, The Play of God, The Song of Rama, and Shakti, as well as translating the Bhagavad Gita. She is the founder and president of Vanamali Gita Yogashram, dedicated to sharing the wisdom of Sanatana Dharma and charitable service to children. She lives at the Vanamali ashram at Rishikesh in northern India.

“Scholarly and insightful on the meanings of these legends, The Complete Life of Krishna is a strongly recommended pick for religious history collections focusing on Hinduism and eastern religions.”
— Midwest Book Review, August 2012

“Drawing from the Bhagavad Gita and other sacred texts, the author explains how Krishna became a mahayogi, the greatest of all yogis, with complete mastery over himself and nature. On whatever level you receive these stories, they are a valuable meditative tool, full of delight and wisdom.”
— Whole Life Times, August 2012

“Vanamali’s new book will entrance readers as a first introduction to the immortal Lord of Love, or as a cherished opportunity to once again dip into the nectar of the Lord’s lila, his play on earth.”
— Light of Consciousness, October 2012

“Recommended for new age and spirituality collections alike, this draws from a range of sources, from India’s oral tradition to the Bhagavata Purana, Gita, Mahabharata and more, exploring Krishna’s life, how he became the greatest of all yogis, and how he evolved to the position of a divine ruler. Any collection strong in Indian spirituality needs this in-depth coverage.”
— Midwest Book Review, November 2012