Sacrificial Ceremonies of Santería: A Complete Guide to the Rituals and Practices (Paperback) 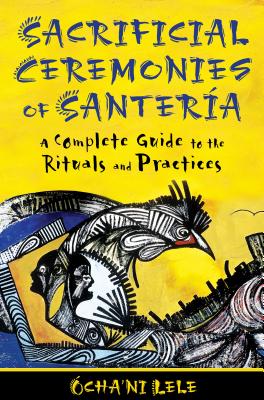 The first book to explore the history, methods, and thinking behind sacrifice in the growing Santería faith

• Chronicles the legal fight all the way to its 1993 U.S. Supreme Court victory to establish legal protection for the Santería faith and its practitioners

Tackling the biggest controversy surrounding his faith, Santería priest Ócha’ni Lele explains for the first time in print the practice and importance of animal sacrifice as a religious sacrament. Describing the animal sacrifice ceremony in step-by-step detail, including the songs and chants used, he examines the thinking and metaphysics behind the ritual and reveals the deep connections to the odu of the diloggún--the source of all practices in this Afro-Cuban faith.

Tracing the legal battle spearheaded by Oba Ernesto Pichardo, head of the Church of the Lukumi of Babaluaiye, over the right to practice animal sacrifice as a religious sacrament, Lele chronicles the fight all the way to its 1993 U.S. Supreme Court victory, which established legal protection for the Santería faith and its practitioners. Weaving together oral fragments stemming from the ancient Yoruba of West Africa, the author reconstructs their sacred stories, or patakís, that demonstrate the well-thought-out metaphysics and spirituality behind the practice of animal sacrifice in the Yoruba and Santería religion, including explanations about why each animal can be regarded as food for both humans and the orisha as well as how sacrifice is not limited to animals.

Shedding light on the extraordinary global growth of this religion over the past 50 years, Lele’s guide to the sacrificial ceremonies of Santería enables initiates to learn proper ceremony protocol as well as gives outsiders a glimpse into this most secretive world of the santeros.

Author of The Secrets of Afro-Cuban Divination, Ócha'ni Lele (1966-2019) was immersed in the underground culture of Orisha worship in 1989. By 1995 he had received several initiations in both Santeria and the Congo faith Palo Mayombe and in 2000 he made Ocha and was crowned a Santeria priest.

“The Lucumi faith - better known to non-initiates as ‘Santería’ - has been one of the most misunderstood and maligned subjects in Western history. The good news is that this is finally changing. The importance of Sacrificial Ceremonies of Santería cannot be overstated. For those inside the religion, it will doubtlessly be a useful textbook - containing not only the sacrificial rituals, but also information on the Orishas. For those outside the religion, this book is an absolute must-read! You will find here secrets never before revealed to the outside world. But, more importantly, you will find a detailed history of the origins of the Lucumi faith, the rise of ‘Santería’ in Cuba and its further migration into the U.S. and beyond. And, best of all, you will finally learn the true meanings and motivations behind the often-demonized practice of animal sacrifice. You don't have to practice it, nor even agree with it, to come to a better understanding of a religious mystery that has such profound and moving significance for those in the Lucumi faith. Ócha’ni Lele has provided us with yet another magnum opus in his ever-growing library of Lucumi textbooks, instruction manuals and mystical explorations. If you study religious movements here in the West, you simply cannot ignore this book.”
— Aaron Leitch, author of Secrets of the Magickal Grimoires

“…very useful to students of religion, history, and folklore, as well as general readers eager to know more about this complex religion. It will be a welcome addition to academic and public libraries.”
— Cynthia Duncan, Ph.D., professor of Hispanic Studies at the University of Washington Tacoma and auth

“This book is an important work that can dispel the fears and false assumptions about animal sacrifice held by the general public and he chronicles in great detail the struggle for Santería to be recognized as a legitimate religion by the Supreme Court. Practioners of the Yoruba, Santería, Candomble, and Lucumi traditions will better understand their common origins and practices after reading this book; and it will serve as a text for the thousands of initiates in priestly training. This book is fully researched, the information is balanced and integrated, and his writing voice is clear, humble, and humorous. It is an excellent delineation of the deeper meanings secured within the sacred Orature of the tradition.”
— Luisah Teish, author of Jambalaya: The Natural Woman’s Book of Personal Charms and Practical R

“Lele offers every reader insight into ceremonial sacrifice by opening the door to a secret world of the Santeros. He challenges us to both understand and practice authentic sacrifices through ritual and accomplishes a rapport with the reader right from the start. Lele shows how nothing is wasted in a life that includes spiritual sacrifice. And Lele wastes nothing in this beautiful, intelligent and researched presentation of the sacrificial ceremonies of the Santeros. This book brought me a deeper appreciation for the necessary sacrifices in my own spiritual practice and for the unique heritage of his Lucimi faith. A book I would highly recommend for anthropologists and spiritual seekers who want an in-depth look into this remarkable ceremony.”
— Julie Tallard Johnson, MSW, LCSW, author of Wheel of Initiation

“Written in equal parts journalistic/academic style and personal account, Lele gives clear historical and political context for the development of Santeria and explains how ancestor worship factors into animal sacrifice. The account is thorough and gives the Santeran side of conflicts over sacrificial practices. He even digs into Santeran folklore, providing a complete context for these practices...Highly recommended.”
— Diana Rajchel, Facing North, March 2013

“Finally we have an author willing to serve up the spiritual beauty of ancient Africa at the table of the modern world. Clearly, there is a legacy beginning to unfold.”
— Iyanla Vanzant, founder of Inner Visions Spiritual Institute and author of Peace from Broken Pieces.