Different Every Time: The Authorized Biography of Robert Wyatt (Paperback) 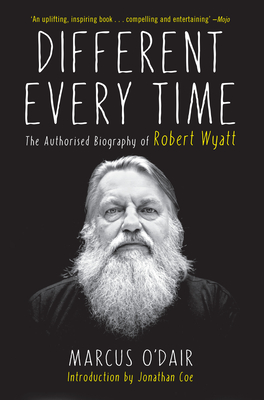 Robert Wyatt started out as the drummer and singer for Soft Machine, who shared a residency at Middle Earth with Pink Floyd and toured America with the Jimi Hendrix Experience. He brought a jazz mindset to the 1960’s rock scene, having honed his drumming skills in a shed at the end of Robert Graves’ garden in Mallorica, Spain.

Wyatt's life took an abrupt turn in 1973, when he fell from a fourth-floor window at a party and was paralyzed from the waist down. He reinvented himself as a singer and composer with the extraordinary album Rock Bottom, which he followed with an idiosyncratic string of records that uniquely combine the personal and political.

Along the way, Robert has worked with the likes of Brian Eno, Bjork, Jerry Dammers, Charlie Haden, David Gilmour, Paul Weller and Hot Chip. Marcus O’Dair has talked to all of them—indeed anyone who has shaped, or been shaped by Wyatt over five decades. Different Every Time is the first biography of Robert Wyatt, and it was written with his full participation. It includes illustrations by Alfreda Benge and photographs from Robert’s personal archive.

Marcus O’Dair has written on music for The Guardian, The Independent, Financial Times and Jazzwise, and is a regular contributor to BBC Radio. He co-leads the Popular Music course at Middlesex University and is one half of Grasscut, who have released two acclaimed albums and toured across Europe. He lives in London with his wife, Charlotte and their toddler, Iris.

“English music has produced some fascinating personalities, but few are as unusual as Robert Wyatt. This excellent book captures his gentle, generous and intelligent personality, and is incidentally a very good history of the music scene in England from the 1960’s onward.” –Brian Eno

“Wyatt is one of the greats of English music.” –Geoff Travis, Rough Trade

“If you don’t believe avant-garde political music and be both playful and polemical, heartfelt and heartbreaking, you need Robert Wyatt in your life.” –NME