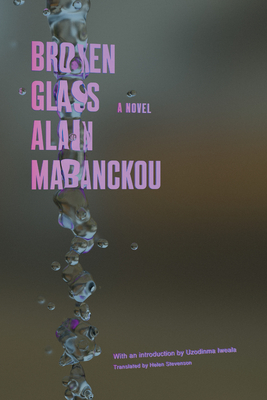 An irreverent, allusive, scatalogical, tragicomic masterpiece that centers on the patrons of a run-down bar as they try to document the details of their lives in a country that appears to have forgotten the importance of remembering.

In Republic of the Congo, in the town of Trois-Cents, in a bar called Credit Gone West, a former schoolteacher known as Broken Glass drinks red wine and records the stories of the bar and its regulars for posterity: Stubborn Snail, the owner, who must battle church people, ex-alcoholics, tribal leaders, and thugs set on destroying him and his business; the Printer, who had his respectable life in France ruined by a white woman, his wife; Robinette, who could outdrink and outpiss any man; and Broken Glass himself, whose own tale involves as much heartbreak, squalor, disappointment, and delusion.

But Broken Glass fails spectacularly at staying out of trouble as one denizen after another wants to rewrite history in an attempt at making sure his portrayal will properly reflect their exciting and dynamic lives. Despondent over this apparent triumph of self-delusion over self-awareness, Broken Glass drowns his sorrows and riffs on the great books of Africa and the West. Brimming with life, death, and literary allusions, Broken Glass is Mabanckou's finest novel--a mocking satire of the dangers of artistic integrity.

Alain Mabanckou is a novelist, journalist, poet, and academic. A French citizen born in Republic of the Congo, he currently lives in Los Angeles, where he teaches literature and creative writing at UCLA. His books include African Psycho, Letter to Jimmy, Black Bazaar, Tomorrow I’ll Be Twenty, The Lights of Pointe-Noire, and Black Moses. Mabanckou has twice been a finalist for the Man Booker International Prize, in 2015 and 2017.

Helen Stevenson is a piano teacher, writer and translator. In addition to several books by Alain Mabanckou, she has translated works by Marie Darrieussecq, Alice Ferney, and Catherine Millet.

Uzodinma Iweala is the author of Speak No Evil and Beasts of No Nation, which was the winner of the Los Angeles Times Art Seidenbaum Award for First Fiction, the Sue Kaufman Prize for First Fiction from the Academy of Arts and Letters, the New York Public Library Young Lions 2006 Fiction Award, and the 2006 John Llewellyn Rhys Prize. He lives in New York City and Lagos, Nigeria.

“Whatever else might be in short supply in the Congo depicted by Alain Mabanckou, imagination and wit aren’t . . . Broken Glass is a whistlestop tour of French literature and civilization, and if you don’t know your Marivaux, your Chateaubriand, your ENAs and Weston shoes you’ll miss a lot of the gags (“a quarrel of Brest,” anyone?)—but don’t worry, there are still plenty left. It’s not just French writers who make an appearance. That arch navel-gazer Holden Caulfield . . . has a walk-on part, and Broken Glass ends “we'll meet again, in the other world, Holden, we’ll have a drink together . . . I’ll tell you what they do with the poor little ducks in cold countries during winter time.” Although its cultural and intertextual musings could fuel innumerable doctorates, the real meat of Broken Glass is its comic brio, and Mabanckou’s jokes work the whole spectrum of humour . . . Much of the writing from Africa (or at least most of the stuff we get to see) is of an earnest or grim character, and it makes a pleasant change to encounter a writer who isn’t afraid of a laugh.” —Tibor Fischer, The Guardian

“This is not cute Africa, as described by Alexander McCall Smith . . . Mabanckou is one of Africa’s liveliest and most original voices, and this novel pulses with energy and invention.” —The Times of London

"Broken Glass has a loud and living voice, an almost overwhelmingly singular style masterfully translated with dedicated consistency by Helen Stevenson, with fireworks on every page, and expertly navigates its many unapologetically human projects. It casts a bright, honest light on its subjects, and asks questions that are democratic, serious, and perilous for those in power: Whose stories are worth telling? And who gets to tell those stories? All of this even as Mabanckou beautifully, subtly, sadly, and, yes, redemptively tells the story of a narrator grieving from the bottom of a bottle. The book is profoundly literary, bouncingly readable, funny, heartbreaking, obscene, fierce, and restorative. It’s a book of love, really. Tough love. What more could you want from a masterpiece?" —Scott Cheshire, Los Angeles Review of Books

“It is the author's sense of humor—and he can find humor in even the most tragic or vulgar circumstances—that makes Broken Glass a memorable and successful novel.” —Booklist

“This novel is, among other things, an idiosyncratic and raucously impertinent tour of the Western canon . . . It’s also worth noting that, unlike many authors who might be called experimental, Mabanckou is funny, and his Rabelaisian riffs are a brilliant counterpoint to the real despair and dysfunction he depicts. Important, entertaining and subtly moving.”—Kirkus Reviews