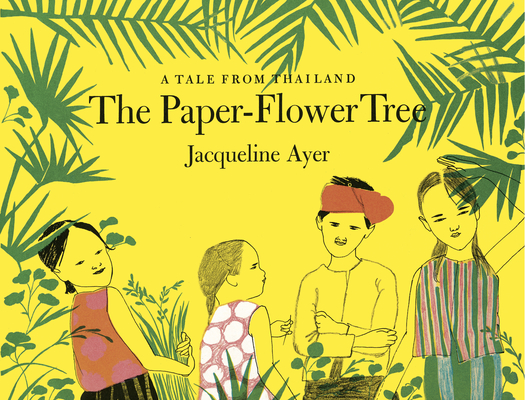 One wonderful day, an old peddler arrives in the small village in faraway Thailand where a little girl named Miss Moon lives. He brings a tree with him, fashioned of brightly colored paper flowers. How Miss Moon longs to have such a tree When the old man gives her one of the flowers in parting, she plants its seed--a black bead--and tends it faithfully. Little black beads can't sprout and grow, of course, but Miss Moon's faith is rewarded all the same Filled with the sights and sounds of Thailand, this touching tale is true to childhood the world over. In these pages, Ayer's bold color and expressive illustrations draw us into a world that feels both intriguingly foreign and wonderfully familiar. Jacqueline Ayer was a Jamaican-American, born in New York City in 1930. She began her education at the Art Students League in New York, proceeded by time spent at Syracuse University and the Ecole des Beaux Arts in Paris. Ayer was a head fashion designer in London for many years and created more than 10 children's books, for which she was awarded a Gold Medal from the Society of Illustrators.

The daughter of Edward and Thelma Brandford, Jacqueline grew up in the Bronx at the 'Coops', a co-operative built for garment workers. She went to Music and Art High School, followed by Syracuse University. She continued her studies in Paris which led to work as an assistant fashion illustrator. From there she was introduced to Christian Dior and the Vogue Editor M. de Brunhoff, which lead to work as a fashion illustrator for Vogue and Bonwit Teller in New York. Her marriage to Fred Ayer led to a move to Thailand, where she wrote and illustrated children's books and started the fashion company Design Thai, supported by the Rockefeller Foundation. In later life she worked in India for craft and textile development under Indira Gandhi and in New York and London, designing home furnishings for companies including Bloomingdales and Conran.